Here's my top five list for the year and it covers books that I've read this year, not necessarily books that were published this year.

Comments: There's a couple of stories that I really really loved from the 2007 Nebula Awards such as Ted Chiang's "The Merchant and the Alchemist's Gate" and Daniel Abraham's "The Cambist and Lord Iron" but I read them in 2007. There's also some 2008 anthologies that I haven't gotten to read such as Eclipse 2 and Best American Fantasy 2 which I expect will feature some great stories that I'm missing out on. Also, see Everything Else.

"Little Gods" by Tim Pratt (Little Gods) - It's the story I want every girl I have a remote romantic interest in to read.

"Daltharee" by Jeffrey Ford (The Del Rey Book of Science Fiction and Fantasy) - The Hollywood pitch would be retro-scifi with a modern touch. Also Ford's most upbeat story in the past year or two. "A Fable with Slips of White Paper" by Kevin Brockmeier (Best American Fantasy) - The brevity and simplicity can be misleading as it weaves into something bigger and touching. Also kudos to the ending of the story.

Comments: Well, again, another disclaimer is that I didn't get to read some of this year's latest "best of" anthologies such as Best American Fantasy 2 (it wasn't available for order in early December and it takes 3 weeks for the bookstore at best to have it in stock). Also one thing to bear in mind is that the "best of" anthologies--or at least one of them--will have an automatic slot in the list (because "best of" anthologies are always invaluable) and in this case, they occupy three out of the five slots (although one of them was from last year), leaving little room for the original anthologies. Also, I see the "best of" anthologies as interconnected. For example, Best American Fantasy and Fantasy: Best of the Year presupposes that The Year's Best Fantasy and Horror is the basis for comparison (and one of their strong points is that they deviate from the "norm", the norm being The Year's Best Fantasy and Horror) and the three form my holy triumvirate (most likely in the years to come if the quality remains consistent).

Nemonymous: Cone Zero edited by D.F. Lewis - One of most refreshing magazine/anthology I've read in recent years (of course that could just be due to my ignorance) and each story is distinct and makes an impact. Besides, between the anonymous authors and the "cone zero" concept, how could you fail?

The Year's Best Fantasy and Horror 2008 edited by Ellen Datlow & Kelly Link & Gavin Grant - On the non-fiction side, the summary and the honorable mention is a much-awaited list. When it comes to the fiction, it's certainly a strong selection.

Best American Fantasy edited by Jeff & Ann Vandermeer, Matthew Cheney - For the most part, it covers territory not featured in other anthologies in addition to including great stories in general.

The Living Dead edited by John Joseph Adams - Blew me away. Okay, here's the thing: this is a thick anthology and each story will do one of two things. Either it'll make an impression on you or it represents a field in the zombie mythos. If nothing else, the sheer content will overwhelm you.

Fantasy: The Best of the Year 2008 edited by Rich Horton - Includes a distinct selection from the other "best of" anthologies out year and bonus points because I'm attuned to Horton's choices which means I really, really liked around 90% of his choices.

Comments: There's actually a couple of good short story collections in recent years including John Grant's Take No Prisoners and Elizabeth Hand's Saffron and Brimstone. This list I think is more representative of what appeals to me and I'm glad there's a variety of quality titles to choose from.

20th Century Ghosts by Joe Hill - Hill goes for the jugular as he writes powerful horror stories that are propelled by characterization and technique. One could even consider his fiction Literary (that's with a capital L!) and this is one of the more refreshing collections that I've read in recent times.

Pretty Monsters by Kelly Link - I'm a big fan of Link and the titular story, "Pretty Monsters", doesn't disappoint. For the most part, Link fans will want to get this because it compiles some (not all) of her more recent work.

Pump Six and Other Stories by Paolo Bacigalupi - Bacigalupi is one of the hottest SF writers that deals with current issues and this is evident from his most recent stories. This is honestly what I imagine modern science fiction to be.

Little Gods by Tim Pratt - "Little Gods" is one of those stories that justifies purchasing an entire book but that aside, Pratt is my Hemmingway when it comes to speculative fiction. He accomplishes so much with so little and one can sense the passion in those pieces. Is Pratt perfect? Not by any means but his stories tend to be enjoyable nonetheless.

The Drowned Life by Jeffrey Ford - There's actually less variety in terms of style compared to Ford's previous collections but there's also a certain maturation in his writing, a "I've settled down" kind of feeling. His sophistication can be nailed down to sheer technique and at the very least Ford proves that he's as skilled as he ever was.

Comments: I haven't been reading many novels lately as I tend to focus on short stories (be it magazines, short story collections, or anthologies) but this is I think a good representation of what I look for in speculative fiction aside from my guilty pleasures. These are books that I can throw at the Literati crowd as they can stand well on their own even against canonical giants. A lot of the books in other people's lists, such as Jo Graham's Black Ships, I simply haven't had time to read. J.M. McDermott's novel Last Dragon isn't in my list because I read it last year and thus made my list in 2007.

How to Make Friends with Demons by Graham Joyce - This is the single novel that made me believe in the author. Suffice to say, Joyce's fiction has gravity at the same time balancing his speculative fiction elements so that they are relevant to the entire framework. A selection from the novel also won the O. Henry Award.

The Secret History of Moscow by Ekaterina Sedia - Sedia's writing makes me green with envy as it's both easy to read and compelling. The strength of this novel is its inclusion of Russian myth and how each chapter adds something new to the novel.

Under My Roof by Nick Mamatas - No wasted space here as each chapter both has an impact and lures you deeper into the narrative. This is a well thought out and well-written book and Mamatas's protagonist is a distinct character.

The Shadow Year by Jeffrey Ford - The impression that Ford gives off is that he is Bradbury reborn as The Shadow Year is both a touching and well-crafted novel with all the right elements and technique thrown in. Easily stands toe-to-toe with my favorite Ford novel, The Portrait of Mrs. Charbuque.

Comments: Technically, these are still books per se but are usually too short or don't fall under any of the other categories.

A Field Guide to Surreal Botany by Janet Chui & Jason Erik Lundberg - Strictly speaking, this is an anthology but it's presented in a way that's different and warrants itself a new category altogether. Suffice to say I'm pleased with the execution, both in the production and the actual prose. Definitely a memorable item and one that you could easily give to anyone. 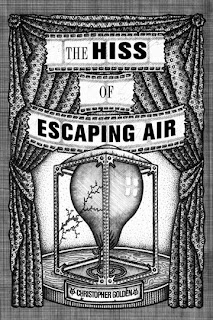 The Hiss of Escaping Air by Christopher Golden - It's a chapbook but it's such a terrific story (in terms of skill) that yes, it deserves to stand well on its own.

Fairy Tales for Writers by Lawrence Schimel - For the most part, this was fun. Poetry combined with a fairy tale theme and writing advice. How can you beat that combo? 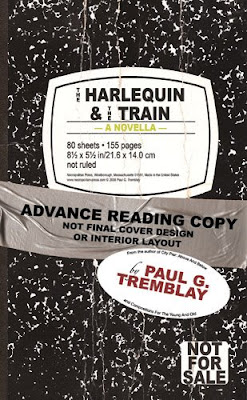 The Harlequin & The Train by Paul G. Tremblay - Paul G. Tremblay? An awesome and versatile writer. This book will hook you and proves what you can do with characterization and horror. And yellow highlighters.

12 Collections & The Tea Shop by Zoran Zivkovic - Suffice to say, the experience for me is like someone discovering Gabriel Garcia Marquez for the first time. Or Umberto Eco. Zivkovic's a non-American writer that's talented and bring something new and different to the field, definitely not limited by constraints of genre.

Comments: Here are what I think are my top five interviews on this blog. And what I mean by that is that these are interviews which through sheer luck and some miracle, I managed to coax a lot out of the interviewee (the brilliance of their answers of course is attributed to them).

Sean Wallace
Posted by Charles at 7:33 AM