Why I Stopped Choosing with My Heart


You meet someone new. You get along.

Somewhere along the way, you fall in love. You don’t always know what triggers it: a favorite song, a poem they share, a book they like.

You think it’s too good to be true. And it is. They get mad at you, even if you don’t immediately know what caused it.

If you’re lucky, they talk to you again. You get to know them more.

You start seeing the cracks. You have a list of people you’ll never date. You make an exception.

They get angry, again. You’re both too different:

You want to solve the problem. They don’t want to talk about it.

You learn patience, when you yearn for compromise. They learn forgiveness, when they yearn for acceptance.

You cope by crying yourself to sleep, writing letters that never get read, and rereading the scant words they left.

You get more chances than you deserve but you squander it by conveying how much you’ve been hurt.

You realize too late that to save the friendship, you need to shut up, swallow your pride, and sacrifice your heart.
Posted by Charles at 9:27 AM No comments:

Email ThisBlogThis!Share to TwitterShare to FacebookShare to Pinterest
Labels: day in the life, essay

VOLUME holds several meanings. First, that there is an abundant amount of excellent fiction in English currently being written by the younger generations. Second, that these stories must be read and shared. And third, that they deserve a place in bookcases and classrooms all over the country.

VOLUME 1 will be the first book in an anthology series that will showcase fiction by Filipino writers, age 45 and under, selected without regard for boundaries or genres. VOLUME 1 will be launched in September 2013.

1. Submissions are open to all Filipino citizens 45 years and younger as of the end of 2013.
2. Submit only original unpublished short fiction written in English. ‘Unpublished’ is defined as not having previously appeared in part or in full in any print or digital media (including online refereed markets, blogs or any social media).
3. No multiple submissions. Submit only one piece of fiction for consideration.
4. Short stories only. Open theme, any genre.
5. Story word count cannot exceed 7500 words. Our preferred word count is in the range of 3500 to 5000 words.
6. Submissions should be formatted as Word Document files (.doc, .docx) or in Rich Text Format (.rtf) in simple fonts.
7. Submissions must be accompanied by a cover letter that includes your name, your preferred byline and contact information.
8. Send your submissions to dean@kestrel.ph or sargelacuesta@gmail.com. We will confirm receipt of your work within 24 hours.
9. Deadline for submissions is midnight of June 30, 2013. Our reading period begins immediately afterwards. Letters of acceptance or regret will follow.
10. Contributors will be paid Php5000.00, as well as 2 copies of the book, for the exclusive first print rights to their story, as part of the anthology.

We look forward to your stories and appreciate your help in spreading the word.

10 Stories for My Future Lover

I love science fiction. I believe in time travel. This is my past self sending you a missive into the future.

By this time, you'll know that I'm horrible with words. But I do love stories, and if there's anything you can take away from our relationship, hopefully it's these:

Who I Was Missing Before I Met You

"Say Zucchini, and Mean It" by Peter M. Ball

Why I Never Gave Up

Is it Too Good to be True?


"The Empire of Ice Cream" by Jeffrey Ford

For The Days When We Drift Apart


When You Leave Me for the First Time

Making Sense of It All

"26 Monkeys and the Abyss" by Kij Johnson

Hopefully It Never Comes to This


Read In Case of Emergency


All of This is an Illusion

Julia Rios posed a question the other day: What would you consider the most important texts to teach in a class about SF/F? (Strangely enough, I didn't see the fantasy part, and interpreted it as limited to just science fiction.) Assume the reader is unfamiliar, and that you are limited to 5 novels/novellas and 5 novelettes/short stories.

There were, of course, the standard disclaimers (scope, audience, agenda, etc.), but what Julia was asking was really a person question: if you were given a chance to create a curriculum, without limits aside from the parameters above, what texts would you select? It's your choice on which particular topic to select, whether it's the classics, gender, colonialism, etc.

Again, I neglected to notice the fantasy part, so as I pondered the question, I limited myself to science fiction (despite the fact that I believe fantasy and science fiction aren't that different from each other).

What appeals to me are stories that tackle human nature so if there's an agenda behind my selection, is that. And since we're given limitations of 5 novels/novellas and 5 novelettes/short stories, I want to juxtapose them and show readers how the form of one interacts, and how different (or similar) it is to the other. 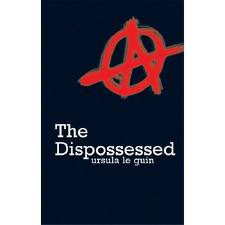 I'd start with Le Guin's short story: it's brief, concise, and there's lots of elements for the reader to parse out. It's a dystopian story but that's left for readers to decide (and an important question is whether they would want to live in such a world). The Dispossessed, on the other hand, is its opposite: it's probably a more difficult read but Le Guin is more direct here. You have two supposedly utopian/dystopian societies, but is that really the case? 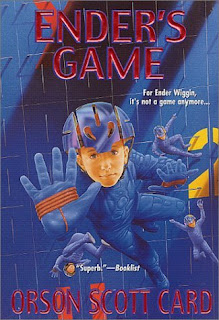 There's three points I want to highlight by this selection. The first is the story itself: do the ends justify the means? Is ignorance truly an excuse? Is there such a thing as an innocent killer? The second is the format: in the transition from novelette to novel, what were the elements that were added? Does this enhance the story or detract from it? And then there's my third point: knowing Card's homophobia, how does this change the way you react to the text or shape the way you read it? 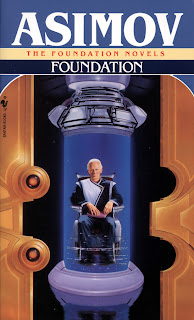 In the first pair of texts, what's discussed is society; in the second, the individual, and how they are manipulated into their role. For this choice, I wanted to transition to determinism. Foundation is an interesting choice for me because it's really a bunch of short stories rebranded as a novel. Would the readers consider them as short stories or novels? The way society is manipulated in the stories is also an interesting talking point. "Story of Your Life," on the other hand, shifts from the larger society to the individual (and it's a stark contrast from the detached point of view of Asimov to the very personal story that Chiang chooses to employ). And Chiang brings up several important points, especially language.

"The Man Who Ended History: A Documentary" by Ken Liu and "Spar" by Kij Johnson

What I like about these stories is that they're modern and they're very personal. Liu's protagonist rebels against prevalent society, and the narrative is told in such a way that it's viewed from different perspectives. Which is apt given the omniscient, single view a lot of stories have. And it's a story that revolves around society. "Spar" also requires reading the text beyond the surface, and digging deep into it. It's also a story where there's an implied society (whether the protagonist or the alien), as opposed to being at the forefront. And in both pieces, there's a return to the individual, although the choice of perspective differs. 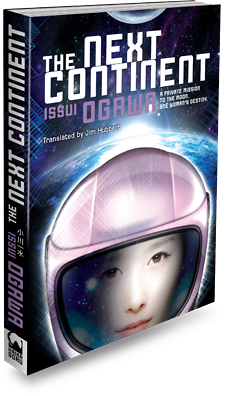 I chose The Next Continent because it's society viewed from the lens of the Japanese, and makes different assumptions while still retaining the sensibilities of utopian science fiction. On the other end of the spectrum is "The Pelican Bar," and it's a story that some might question whether it's science fiction, but also why for me genre boundaries are more interstitial than set in stone.

What would your curriculum look like? And perhaps more interesting is to ruminate this question with fantasy in mind as well (maybe a future blog post?).
Posted by Charles at 8:09 AM 1 comment:

I've been disheartened lately when it comes to promoting Filipino comics due to a series of unfortunate incidents: a Fed-Ex package sent to a friend abroad encountered a mishap (and it's a tragedy not because of the financial costs, but rather because those were two dozen comics that's difficult to obtain due to the nature of indie comics), the company website's database goes down on the day I started plugging a comic I enjoyed (I suggest Registering first, filling out all the forms, then Logging in before checking out your order), and despite my best attempts to get more female comic creators (you can hear my rant about the lack of female name recognition in this podcast) to participate in the day job's Free Comic Book Day, a lot declined.

But feeling sorry for myself gets no one anywhere, so here's my last ditch effort. I think there's a lot of interesting, diverse work being done in local comics, but due to small print runs, lack of distribution, and absence of digital copies, it's a huge hurdle to spread awareness of Philippine comics outside of Metro Manila. So it dawned on me to get various comic creators to distribute their work at the day job's eBookstore for Free Comic Book Day. You can read more about it at the company blog, but I wanted to highlight some comics that I think will be of interest to my readers (and what I'll be picking are in English, so you don't have to worry about the translation hurdle): 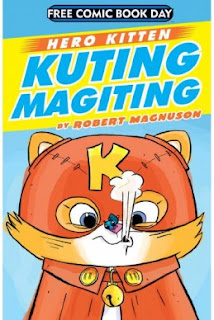 Kuting Magiting by Robert Magnuson
Despite the title, this is mostly a wordless, all-ages comic in English and highlights the strengths of the comics medium, whether it's the beats, the panels, or the effective use of imagery. If there's one comic I want you to try out, it's this one. 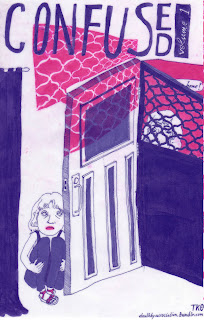 Confused Volume 1 by Trizha Ko
While admittedly not the most polished work in terms of visuals, there's a rawness and willingness to tackle taboo subjects in this comic. It has a solid feminist bent that's lacking in the local comics scene, and hopefully others will give it a chance. 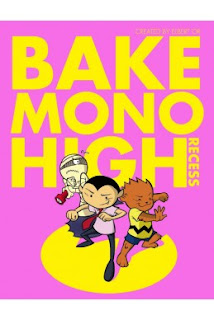 Bakemono High: Recess by Elbert Or
This one's an all-ages comic from my best friend. I wouldn't say it's high art, but definitely one that features amusing, self-contained strips. 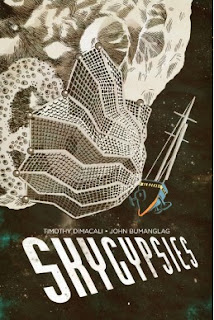 Skygypsies by John Raymond Bumanglag & TJ Dimacali
It's not often that I encounter Filipino science fiction stories, so here's a comic that's just that. 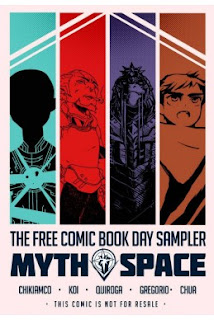 Mythspace: Free Comic Book Day Sampler 2013 by Paolo Chikiamco,  Koi Carreon, Cristina Rose Chua, Jules Gregorio, Paul Quiroga, Borg Sinaban, Mico Dimagiba
My main problem with this is that it's a sampler (rather than a self-contained comic), but if you're interested in a Filipino folklore-inspired science fiction comic, here's a preview of what we're capable of.
Posted by Charles at 6:45 PM No comments: