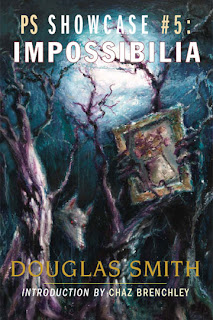 There are only three stories in Impossibilia but each story is unique and different, showcasing a different aspect of Douglas Smith's talent.

"Bouquet of Flowers in a Vase, by Van Gogh" is the strongest piece for me and it's appropriate that it's the first story one runs into. What makes it compelling is the mystery surrounding the protagonist and Smith makes use of flashbacks effectively. This is an easy read and throughout the narrative, the author manages to sustain the suspense as he perpetually hints at something larger. Characterization, foreshadowing, and even action--Smith has it pat down with this story.

The second feature, "Spirit Dance", is an adventurous tale that's propelled by character drama not unlike the first story. The conflict here, however, is more transparent. If this was a Hollywood movie, this would be your blockbuster film, complete with adrenaline-pumping action, expensive special effects, and even a sex scene or two to lure in a mainstream audience. Overall this was an enjoyable story although not as memorable or remarkable as the first.

"Going Down to Lucky Town" again showcases something different on the part of Smith. This is very much a con story and the author succeeds in accomplishing his goals at the same time injecting it with speculative elements. The set-up was handled judiciously and the ending delivered on the goods. This piece caters to a sub-genre (or a combination of two disassociated genres) that's neglected in my opinion but Smith does it justice and gives it the proper treatment it deserves.

Overall, Impossibilia was fun romp that delivered something different. Smith is quite readable and while I wouldn't classify his stories as the paragons of excellence, he definitely writes stories that are exhilarating, enjoyable, and well above competence.
Posted by Charles at 12:20 AM