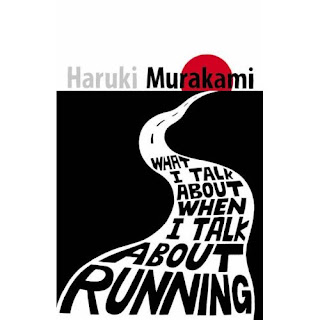 Perhaps this book is best described as a memoir. On one hand, Haruki Murakami talks about his trials about running but this isn't a health and wellness book. On the other hand, he also relates it to his career as a writer but this isn't Stephen King's On Writing either.

What I Talk About When I Talk About Running is rather short but it's a compelling read all throughout and Murakami manages to pack a lot in those few pages. He starts out apologetic, not wanting this to be the definitive narrative of anything but later on, Murakami gets in the groove and loosens up as he becomes more honest and writes how running relates with his life, both personal and professional. The author's nonfiction is as charming as his prose but obviously, there's clearly a different quality to it--more along the lines of sensibility and restraint rather than lyricism or big epiphanies.

There's a lot of juggling around as Murakami switches back and forth between his past, an upcoming marathon, and the triathlon. There's a neat progression to the book: it begins in August 2005 and culminates to August of 2006 where Murakami finishes a race (and aptly writes his own epitaph). As someone who considers himself a runner--although not in the same level as athletes and Murakami--I can relate to most of what the author talks about. There's also something motivating about the book that makes me want to pick up a pen and write even if Murakami's advice on writing is indirect at best.

Overall this was an enjoyable read and it's certainly an atypical nonfiction book. Murakami fans who're interested in the author's life will want to pick up the book while aspiring writers might want to give it a try although they should be warned that if they're looking for concrete tips on writing, this isn't the venue to look for it.
Posted by Charles at 12:15 AM