Will be having some retrospectives in the next three days (trying to tie it all up by the New Year) so there'll be slightly more content than the usual. 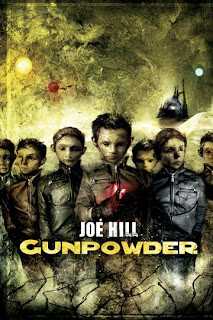 It's an entirely different feeling when you're writing a review and finally seeing it in print (or in my case, published in a blog). In the case of the latter, there's always some detail you want to add or perhaps a typo or two to edit. I tend to correct the latter but stop myself from acting on the former. I could end up in an infinite cycle of revision and the fact is, I'm constantly evolving as a reviewer. If I indulge in perpetual revision, the entire review will become wholly different in a year or even a month's time.

Anyway (while channeling Larry Nolen), I was rereading my review on Joe Hill's Gunpowder and one of those insights flashed in my mind, the type that would have been helpful when I was writing the review. But then again, maybe not. For me, there's always been this division between the reviewer and the critic. Both analyzes but the final presentation or the focus is different. The reviewer, for me, should focus more on the reaction and on the skill of the author. The critic, on the other hand, starts making all sorts of conclusions, tying it to what's come before, what's current, and perhaps even speculating on the future. The critic might even give recommendations to the author. Of course the distinction between the two isn't so clear-cut as one blurs into the other. But that's just my opinion.

There are numerous times when I'm hampered by the limitations I set in my own reviews. If I'm not detailed in my reviews, that's by design. I don't want my reviews to drag on and on but rather the type that you can read in one sitting--preferably under five minutes. I want to give readers enough information whether to read the book or not instead of being a dissertation on the merits of the author's thesis. And then there's my "spoiler-free" disclaimer which isn't absolutely spoiler-free (I do tend to talk, in vague terms, about the ending). It's surprising how little (and how much) you can talk about a book without being concrete in the spoilers. This limitation hampers how much detail I go into my reviews and why, more often than not, I lack specifics. And through a combination of both reasons, a plot summary is often missing in my reviews (but that's not necessarily a bad thing: I don't want to read reviews which are mostly summaries).

Having said that, there's one aspect of Hill's Gunpowder that I want to talk about. And in case you haven't surmised from the diatribe above, there will be spoilers. I don't think this material is essential to the review but it's a topic that might interest the critic or someone who's curious about writing.

It's only upon re-reading my review that I missed one element that Hill excels in this novella. It's the juxtaposition of the various characters. Now the Lord of the Flies-esque concept isn't anything new but I don't praise concepts: I praise execution. In this case, Gunpowder comes out spectacular and fresh that is definitely different from science fiction's other militia-ruled-by-a-boy story, Ender's Game. Readers who are only familiar with the latter might be tempted to make the comparison between Ender's Jeesh and Jake's family. But honestly, the only similarities the two have is that both communities are ruled by charismatic young boys. Everything else is different. For all the merits of Jake, he's not the main hero of Gunpowder and Elaine as the viewpoint character should be a flag to the reader. And this is where the genius of Hill comes in.

Jake, at the start of the novella, is Talented (as in possessing the Talent) while Charley isn't. Jake is the leader of the group while Charley is perceived as the least of them. There are numerous scenes in the first few chapters which establishes this. Yet slowly by slowly, Charley usurps Jake's role. The first hint of this is when Jackson--the interloper--credits the person responsible for building the wall. No one wants to admit that it was exclusively Charley who built it yet every praise Jackson has is in fact directed at him. This is a significant story shift, one that prepares the reader for the incoming change. And before that, it is Charley who comes up with the planet's name, Gunpowder, which we as readers know is significant because it's the title of the book.

And then comes the trap. Everyone who possesses the Talent is enslaved by Jackson via the masks. The only one who's exempt is Charley and he is underestimated by Jackson because he does not have the Talent. Yet in the end, it is Charley who leads the rebellion, not only against Jackson but against the invaders. When it comes to the crucial scene where the ship's guns are aimed at the boys, it is Charley who takes the initiative to use the heavens as a weapon (and suddenly, what little Talent he has rises to the challenge). Jake might have loaned Charley his support but it was the latter who got the ball rolling and in the end, he is the martyr of the story. Jake, on the other hand, is a stark contrast to his characterization at the start of the book. Rather than a fearless, decisive leader, he becomes lost and distracted. The weak became strong (even if he ended up sacrificing his life) while the strong ended up weak.

Another comparison that can be made is between the characters of Elaine and Jackson. Here, Hill is more blatant about it as he voices his thoughts through our narrator: "Elaine felt a dry cold spread through her chest, wondered if the Deans had decided the boys were old enough to need a whore more than a mother." During the chapter "War Council," such observations are made by Elaine. The tension between the two is the most apparent but astute readers will also notice at how the relationships of Elaine and Jackson are reflective of the subversion of Jake and Charley's roles but at the same time representing a different kind of conflict. Jake and Charley for example are genuine comrades even to the very end while Jackson's hold over Elaine and the group is only through her authority and sexuality.

Gunpowder has this undercurrent all throughout yet in my initial review, I only touch upon such themes via these sentences: "What makes Gunpowder work however are the viewpoint characters. Hill's choices are apt and immediately wins over the reader's sympathy." It feels insufficient but my analysis on juxtaposition alone is already longer than the entire review.

That's also for me the big difference between the reviewer vs. the critic. My analysis won't help you in choosing whether to decide to buy the book or not (at least not directly) but rather it's valuable when you've already read the novella. It might confirm your own insights, lead you to your own epiphanies, or perhaps even start a dialogue that's contrary to my thesis. But honestly, to a prospective reader, I don't need to explain all of this. My only worry is that when I say "I don't think this is Hill's best work," I don't mean that it's not brilliant. It's just that the bar he's set is already high to begin with and Gunpowder, while good, is not my favorite when compared to everything else that he's written.
Posted by Charles at 6:04 AM