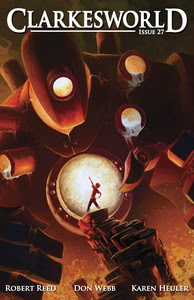 Here we are with the December issue of Clarkesworld and this was certainly a surprise. The fiction side for example has three stories and as for the nonfiction, well, we'll get to that later.

First off, the cover by Adam Gillespie is right on track as far as the Clarkesworld aesthetic sense goes. It has that right combination of the familiar and the weird in addition to modern aesthetics. The artwork is very impressive.

On the fiction side, "A Woman's Best Friend" by Robert Reed seems to be the most striking of all three. Much of the story revolves around the interaction of the two characters and what's interesting is how Reed introduces the bizarreness of the situation around midway through the story--and I think it works. I'm two opinions when it comes to this story. On one hand, it has this utopian but-not-quite-utopian atmosphere. Hard science fiction fans will probably dislike that aspect but for me, that's not really the highlight of the story. On the other hand, there should be this tension--whether dramatic, romantic, or whatever tension you'd like to invest in--between Mary and George and while it's there, I still feel it could have been amped up a bit more. The piece still has a certain restraint that hampers it from standing out as a truly remarkable story.

Mary Robinette Kowal is the voice behind the podcast of this story and I feel it comes to life in her hands. The narrator and the two characters each have distinct voices: the narrator is the default fluent Kowal voice, Mary has that right dose of nobility and condescension, and George sounds aged and baffled. My only criticism is that George tends to sound like a grumpy old woman rather than a grumpy old man but with only one person doing all the voices, I'm not expecting Kowal to channel Hank Azaria. Personally, listening to the podcast was slightly more engaging for me compared to reading the text.

"Episode 72" by Don Webb tried to strike an emotional chord but overall it didn't work for me. The strengths of Webb however is establishing the setting of the piece and giving a distinct personality to her protagonist. Where the author could improve, in my opinion, is that he could have used more moments to show the main character's passion for her supposed love interest. Having said that, I do think the final scene is good, it just lacked the support and build-up from the previous scenes.

"The Complete Rechargeable Man" by Karen Heuler is simply fun, fun, fun. It's wacky, makes use of puns and stereotypes that don't feel out of place, and the interaction between the two main characters is quite effective. One of the highlights for me was the dialogue in the first scene and it quickly establishes the rapport and relationship of the characters without necessarily being too direct. The tone also establishes what kind of story this will be, from beginning to end and while this might not be what I'd classify as one of the best stories for the year, this was certainly a light and enjoyable story that achieves what it sets out to do.

Jeremy L. C. Jones's interview with Ed Greenwood in "To Believe the Magic is Real" has a tight focus, in this case world building. Whether you're a writer planning to write second-world fiction or simply a game master preparing for their RPG campaign, Greenwood gives helpful advice and is a definite change of pace from the usual author interviews.

"Frosty has a WHAT?!!" by Neil Clarke for me is an odd piece. It's certainly not the first open-ended nonfiction in Clarkesworld but I feel it's not too substantive compared to those previous pieces (and Clarke has proven that he can write compelling and insightful nonfiction such as "Cavemen Discovered in the 21st Century" in issue 22). All I'm asking is one or two more paragraphs elaborating on the thesis. Right now, it feels more like an editor's note for the magazine and had it been labeled as such, it would have made perfect sense. Maybe it's a matter of expectations as I was hoping for the one-two combo of nonfiction from the magazine and somehow caught something else entirely in the second half. Since this is an online text that requires participation from the readers, thankfully the piece is drawing conversation in the comments section.

Overall this was a decent issue of Clarkesworld with its share of surprises, both good and bad.
Posted by Charles at 5:02 AM

Charles, thank you for your kind words. I totally agree with you about my reading for George. I kept wanting to do Jimmy Stewart, while knowing that I couldn't do an impression of the man. Still, it's hard to read the story without his character blazing through my head.