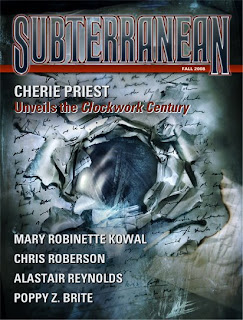 When making an online magazine, there are two philosophies. One is to make it quick and not overwhelming for the reader. The other is to cram as much content as you can, especially since you're not restricted by page count. Subterranean, even back in its print days, was a meaty magazine, showcasing the lengthier fiction pieces and this seems to hold up in its online incarnation. The tag-line above mentions that my reviews are "bite-sized" yet that doesn't seem applicable when tackling this issue of Subterranean.

I'll start off with the podcast. To be honest, I'm not fond of listening to audio fiction. Alastair Reynolds's "Thousandth Night," read by Sam A. Mowry, is the featured podcast in this issue and this is the first time that I'll be judging a piece based on the aural experience alone. Before I start, I want to talk about the audio format. At the time of this writing, Subterranean broke the story into several links. Normally I want to listen to a podcast in one seamless file but considering the length of the story, it's understandable why it was broken into several parts. My next complaint was going to be how the magazine didn't originally post all the links to the podcast but it's been corrected.

As for the critique of the story itself, well, I never imagined myself listening to a fiction podcast for three hours but it ensnared me. There's a method to the breakdown of the podcast episodes and each ends on a cliffhanger that simply hooks you. Reynolds shifts between exposition and action multiple times in the piece. For the most part, I think it works but I can't help but wonder what the experience would have been like had I been reading it. Dialogue is also a strength of the author as there are several scenes which is driven by debates and conversations. My complaint is that I'm still not convinced by the climax as it feels like deus ex machina. Mowry excels in reciting his lines and he's quite fluent. My complaint is that early on, during dialogue, he doesn't really distinguish between the different voices of the characters. Not that you can't follow the dialogue but a more pronounced persona or tone would have been helpful. Later in the podcast though, because the story becomes more dramatic, the voices become more distinct. For the most part, I enjoyed "Thousandth Night," especially with its inclusion of mystery genre elements.

The essay, "Making the Cover for Muse of Fire" by John Picacio, was enjoyable enough and Picacio gives enough visual illustrations to make his point. One complaint is that the first image, when clicked, isn't large enough for some of the text to be readable. Picacio has notes on them and clearly it's part of his example and unfortunately it wasn't resized enough, although readers will understand the bigger picture. Aside from that, the discourse is easy to get into and the images are gorgeous.

For the fiction selections, I'll try to make this quick. My favorites were Mary Robinette Kowal's "Waiting for the Rain" and "Apotropaics" by Norman Patridge. With the former, the author succeeds in establishing rich characterization at the same time sprinkling the story with cultural details. In my opinion, the story could have ended a scene earlier as the preceding one already conveyed the necessary closure. With regards to the latter, it's the shortest piece in the publication but it succeeds in evoking a sense of dread and tragedy. While it could be appreciated on the literal level, for me it shines because it plays upon the reader's knowledge, making what seems like an already bleak atmosphere all the more horrific.

As for the rest, they were for the most part competent. Mike Resnick writes a really funny piece in "Spring Training: A Lucifer Jones Story" although don't expect anything beyond humor. "Tanglefoot (A Story of the Clockwork Century)" by Cherie Priest does a good job of creating setting and some interesting characters but lacks the overall impact I was looking for. "Mirror of Fiery Brightness" by Chris Roberson begins with a slow start but soon becomes a pulpish adventure romp. I appreciated "The Seed of Lost Souls: Introduction" by Poppy Z. Brite and even this novel-in-the-making already had gems in it and Brite succeeds in establishing a dark atmosphere.

"Something About Mary", an interview conducted by Alethea Kontis, was a comfortable, loose interview and one can sense the rapport between interviewer and interviewee as their humor comes to the fore (and is perhaps the highlight of the interview). While Kontis does touch upon Kowal's puppetry and writing, the interview focuses more on Kowal's personality, which is actually quite refreshing.

Cherie Priest is the reviewer for all but one book and I think she does a competent job with them. Her technique focuses more on giving brief overviews of each book and viewing it from the lens of a lay person rather than a critical analysis of each piece. The other reviewer is Brian Keene who reviews John Joseph Adams's The Living Dead. His review stands out more as he has clear opinions and his personality stands out, polarizing the reader for good or for ill which in the long run is probably a good thing.

Despite its flaws, the strengths of the editorial in Subterranean Fall 2008 stands out. The quality of the fiction maintains a certain standard and provokes a reaction from the reader. If the fiction is heavy, the nonfiction has a lighter presence and balances the other lengthy material. Definitely a magazine that's worth paying for even if they're not charging you for it.
Posted by Charles at 7:55 AM