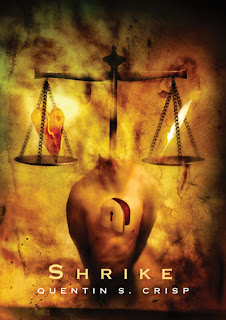 It's been my experience that translated Japanese novels such as those by Haruki Murakami or Banana Yoshimoto have a certain atmosphere to them beyond the brevity of their lines (a casualty of translation, I'm sure). Quentin S. Crisp evokes that same mood in Shrike that goes beyond Japan or his allusion to Japanese authors. Crisp isn't simply a mimic but a writer that has his own unique style, from his chunky but readable paragraphs to his aloof but all-too-human characters.

Part of the allure of the book is how little actually happens and most of the conflict is derived from the contemplation of the protagonist. In that sense, it is similar to many literary novels where the pacing is slow and characterization is the focus, with various images and events acting as metaphors for the hero's true feelings. If you're looking for action, this isn't the book you need to be reading. Instead, the excitement stems from the discovery of the character and the details Crisp shares with us. What is the mysterious shrike and what is the meaning of the signs it leaves?

There's a definitive purpose with Shrike taking place in Japan. The setting comes alive not just with the visuals but with the mood and the atmosphere, such as some of the zen-like scenes Crisp includes. The mythology of the country also comes into play, especially during the story's climax, which is appropriate and ties the narrative together. What I particularly enjoyed, although this is just a minor detail, is how the chapters begin with the kanji for "dream" and sections are separated with the kanji for "heart". There's a certain care in the book design that heightens the narrative.

Overall this was an enjoyable read and appeals to the literary reader in me. Crisp is unconventional and doesn't take the easy way out in terms of storytelling. Obviously, if you're looking for your typical sword & sorcery, don't bother with Shrike but those looking for something more sophisticated or simply different might find this rewarding.
Posted by Charles at 6:19 AM