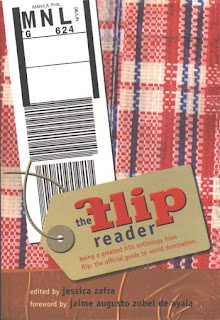 It was still back in college when I first saw a copy of Flip Magazine. It stood out from all the other local magazines because instead of wallowing in despair at the state of the nation, here was Filipino optimism, witty at the same time relevant. I mean where else does one get to read about Filipino sleeper agents in the guise of overseas workers penetrating the global economy? (It should be no surprise that the magazine's subtitle is "The Official Guide to World Domination.") It is editor Jessica Zafra who reminds us the importance of Filipinos such as Bayani Nelvis--a name now forgotten--whose testimony was crucial during the Clinton-Lewinsky fiasco. Or heck, here was a magazine catering to the AB market and had Judai gracing its covers... and people actually bought it (to say nothing of the convincing feature writing)!

The Flip Reader compiles select feature articles and essays from the magazine and are organized into sections. For example, the first section has all the globalization articles. Occasionally, one would run into a post-Flip analysis from the staff of the now-defunct magazine (usually at the start of each section), a retrospective of sorts. One would think this would be a tell-all confession at the injustices of the publishing industry (the Flip staff, after all, are characters in their own right and are known not to pull their punches) but no, they're grateful for their glorious eight-issue run. They are gracious in defeat but then again, scoring a reprint is hardly failure and hopefully this means brighter things to come. Maybe they'll publish a book like Flip Uncensored but in the meantime, the essays are nonetheless entertaining (at the very least, we finally find out the identity of the mysterious Buddha Boy).

The more I dig into the book, the more I'm filled with ideas and insights that will fuel future blog entries and fiction. Roby Alampay's "Fading Fast" is heart-wrenching as he tackles the plight of war veterans subsisting on welfare instead of their promised pension. I find myself agreeing wholeheartedly with Washington Sycip in Zafra's "The State of the Nation According to Washington Sycip." And I've read Alampay's "Ready for Juday" years ago yet there's something about it that calls out to the reader even today. This is just the first half of the book my friends (and just in case you think I only read the first hundred pages, another article that you must read although not while eating is Alampay's "Kingdom of the Cockroaches").

Is the book perfect? Well, considering many of the articles are more than half a decade old, it would have been helpful to know when they were written. (Strangely enough, the message they preach back then seems just as appropriate today.) And of course, it's no replacement for the actual magazine. Some of my favorite articles were the lighter pieces: Krip Yuson talking about the b's of Philippine sports (billiards, boxing, bowling but not basketball) which I found to be more focused than his current columns in the Philippine Star or Tad Ermitano sharing his bookstore shoplifting techniques. Those more stimulated by visuals will note the lack of photos, although those few that do make it into the book are apt. But these are all minor quibbles to what is a fantastic anthology. If it's just a space constraint, I can't imagine any article included in this book that should have been left out or traded for another.

If there is any justice in the world, Filipinos would buy this book. Flip Magazine followed the fate of another well-written publications, Clinton Palanca's Pen & Ink. But unlike the latter, this is a second chance for readers to witness the brilliance that comprise the magazine's staff. It's not just Zafra, it's Ermitano, Lourd Ernest H. de Veyra, Adams Myth, Ramon S. Sunico, and a host of other talented contributors (if I mention more names, I'll be flooding their Google Alerts). In a period where crisis seems inevitable, Zafra and company shows us that we have something to be proud of (or at least intelligently tells us who to blame).
Posted by Charles at 6:04 AM