Next week, I'll be posting my "Top Five Best Of" list for the year but in the meantime, here are a dozen books that I'd like readers to give a second look (or first look as the case may be).

How to Make Friends with Demons by Graham Joyce (Night Shade Books): The release of this book has actually been delayed to January 2009 and my advice is to pre-order it now or get it as soon as its available. This is a terrific novel that impressed me and unfortunately, I'm not seeing a lot of press on it. A section of the novel was published as a short story (much like Neil Gaiman's "Witch's Headstone" in The Graveyard Book) under the title "An Ordinary Soldier of the Queen" and won this year's O. Henry Award.

The New Weird edited by Jeff & Ann Vandermeer (Tachyon Publications): Many have described this title as the "Bible" when it comes to the New Weird and I can't help but agree. Which is ironic because I don't think this book was meant to the be-all and end-all but rather a text that encourages dialogue between the reader and the contributors. Definitely a thumbs up in terms of the format and the reader feels they're part of an actual conversation rather than simply being a bystander.

Devil's Cape by Rob Rogers (Wizards of the Coast Discoveries): There's a lot of non-mainstream superhero novels recently being published but one title that's not receiving a lot of press is Devil's Cape. It combines the best elements of crime fiction with the superhero genre. Here's a part of the blurb from Greg Rucka that I totally agree: "There is NO WAY that this is Rob Rogers’s first novel. This is a novel replete with the rewards of a lifetime of training, effort, and passion." 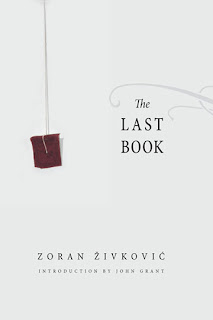 The Last Book by Zoran Zivkovic (PS Publishing): Matt Denault's review eloquently said everything I wanted to say (and more!). I've read Ulysses and Lolita and this is easily as jam-packed and multi-layered as those books albeit with a significantly lesser word count and a more compelling pace. Definitely one of the books that the Fiction crowd will want to wrangle away from genre and claim as their own.

Psychological Methods to Sell Should Be Destroyed: Stories by Robert Freeman Wexler (Spilt Milk Press): Suffice to say, the stories in this chapbook are refreshing. Wexler's definitely a talented author who deserves more attention and you can read his humble beginnings here.

The Del Rey Book of Science Fiction and Fantasy edited by Ellen Datlow (Del Rey): Simply put, a collection of well-crafted and well-written stories. It's not lacking attention thanks to the controversy surrounding Margo Lanagan's "The Goosle" (i.e. every review after the controversy must tackle this story in one form or another) but let's not forget all the other great stories in this book including "Daltharee" by Jeffrey Ford and "Gladiolus Exposed" by Anna Tambour (another underrated author).

The Journey to Kailash by Mike Allen (Norilana Books Curiosities): Not that I'm a poetry expert of even an aficionado but if you want to have a taste of speculative fiction poetry, you can't go wrong with Mike Allen. It compiles some of the poet's best and most recent work. You don't have to be a poetry critic to appreciate it. The Dragons of Manhattan by John Grant (Screaming Dreams): This is an exciting and funny novel, all the while throwing in some recognizable politics and current events. Every scene hooks you to the point that I literally couldn't put it down. The only complaint I have is that this might be difficult for you to order if you're not in the UK. (Edited: You can purchase copies through the website: http://johngrantpaulbarnett.com/Dragons ofManhattan.html)

Spicy Slipstream Stories edited by Nick Mamatas and Jay Lake (Lethe Press): Definitely a guilty pleasure of mine but more seriously, this is one of those anthologies where there were no bad stories in sight and each one had a definite identity. If you like pulp, this is definitely one of the must-have anthologies for the year.

Paper Cities: An Anthology of Urban Fantasy edited by Ekaterina Sedia (Senses Five Press): This is an anthology with a definite goal: usurping the stereotype of "angry chicks in leather" that has become associated with urban fantasy (not that there's anything wrong with "angry chicks in leather"). Did it succeed? Perhaps not but this is nonetheless a good anthology featuring contributions from a diverse set of talented authors.
Posted by Charles at 12:54 AM