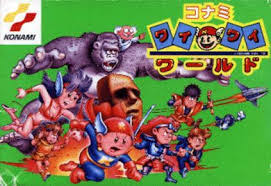 As a young fanboy, I simply loved crossovers (don't we all?). I mean that's what the appeal of Go Nagai's super robots were: Mazinger Z vs Great Mazinger, Mazinger Z vs Getta Robo, etc. Heck, I even settled for the Go Lion/Dairugger XV crossover (a.k.a. The Voltron movie). But that was for animation and it rarely happens in games. These days, you have the likes of Super Robot Wars, Super Smash Bros., and Jump Super Stars (I even remember playing Super Robot Wars, Japanese language be damned!).

One of the perks/disadvantages of living in the Philippines was that in the 80's, our games came from Japan. Most of us played with cartridges that had no boxes and no manuals (it not being in English didn't help either). However, having said that, we got Japanese games!!! One of the Famicom games that never got converted to the NES was Konami Wai Wai World. Gameplay was okay but when I saw it, I was drooling. It's basically a game that had various Konami characters in it: Simon Belmont from Castlevania, Mikey from The Goonies (OMG it's a young Sean Astin!), King Kong from King Kong 2 (who I mistook as Donkey Kong at first glance), and Vic Viper from Gradius among others. (Uh, since I mentioned Gradius, I'll throw in Twin Bee as well, so you know there's a side-scroller stage in there.) At the time, it was the closest thing to a Captain N video game. (Bonus points if you got all those 80's references.)
Posted by Charles at 6:22 AM

Never thought I'd run into you via a 5 year-old blog post about an old famicom game! I got every reference, Charles! Do you still have any of your old video games lying around? If you do, I'm a collector and would be interested to know if you'd want to let go of some of them. Lemme know! In any case, take care & take it easy!