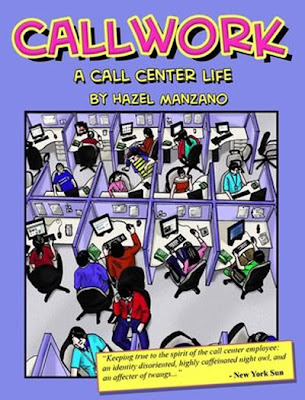 Callwork is a collection of strips which were originally serialized in The Manila Bulletin. As can be guessed from the title, the theme of these strips revolves around the call center industry, a prominent occupation for the middle-class in the Philippines.

Hazal Manzano's art isn't really something to rave about. On one hand, her caricatures fit the comedy and the style she's attempting. It's not polished however, especially in the earlier strips, to the point that some of the characters simply look awful. Not that it detracts from the humor as a lot of these rely more on the delivery of lines rather than the art. Another annoying aspect is the lettering which can be inconsistent throughout the entire series, but not the individual strips (and admittedly this is the exception rather than the norm). Also included in this collection are fan art from various contributors, both professional and amateurs (and as can be surmised, the quality varies).

When it comes to the writing, the initial strips can be baffling instead of funny. Eventually though, Manzano gets into the groove and delivers some honest (I used to work in a call center) and witty anecdotes, making this reader laugh. The combination of Tagalog and English is also put to good use, and Manzano strikes a balance between the two. One problem however is that while there are intentional grammatical errors, there also a few scenes where Manzano does make genuine errors.

The heart of many successful strips are its characters and how the author characterizes them and it's to Manzano's credit that she develops a consistent ensemble. The gay agent, the greedy employee, the not-so-efficient team leader, and the reluctant employees make for great chemistry. The only weakness is that not everyone gets the limelight and characters like Oli and Cathy tend to fall on the wayside.

Callwork: A Call Center Life is good for a few laughs and it takes some time before the comic shifts into high gear. Nonetheless, it occupies a unique niche and covers an overlooked local industry.
Posted by Charles at 5:32 AM