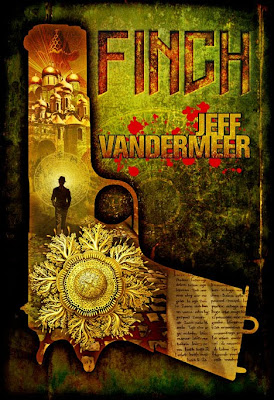 There are several ways to read Finch although for the sake of brevity, I'll tackle two of the most probable experiences. The first is to read this novel with a clean slate and with no preconceptions. In that sense, Jeff VanderMeer weaves this combination of noir fiction--including all of its tropes and then subverting some--and fantasy. Right from the very beginning, we have this enigmatic hook that latches on to you and layer by layer, VanderMeer reveals the nuances of his setting. But the strength of Finch here is how it includes a lot of the elements of crime fiction. We have our angsty protagonist, Finch, who is haunted by his past and his present doesn't fare any better. VanderMeer includes a cast of characters who all have their secrets, each one building up to the finale. And yet because this is speculative fiction, the author manages to accomplish feats which would not be otherwise possible in a conventional crime novel. There are key points, for example, which shock the reader, only for VanderMeer to reveal a previously established plot point that resolves the conflict.

The other way of reading Finch is to take it in the context of VanderMeer's Ambergris trilogy. City of Saints and Madmen was unique in form, presenting a mosaic novel that's otherwise unheard of in any other genre. Shriek: An Afterword, on the other hand, follows a more conventional narrative, but VanderMeer experiments in subtler ways. Finch is very different from the previous two books, combining two genres to create something very different. But even in this new form, it retains its metatextuality, such as Shriek: An Afterword becoming an actual artifact in the story. Another meticulous element is how the author actually wraps up the narrative (so far) of Ambergris. Mysteries in the previous books are given closure here, although it's not really necessary for the reader to be aware of them in the first place. The clues are in the details which rewards readers who are familiar with VanderMeer's previous novels.

But even discarding all of those layered readings, this is a fun book. We have this weird setting with fungus for guns and all sorts of spore-creatures. There's lots of bad guys and our protagonist seems to be outgunned most of the time but manages to become a (reluctant) hero nonetheless. If City of Saints and Madmen was dry, Shriek: An Afterword a bit on the literary side, Finch is unbridled genre that revels in its tropes. The paradox of Finch is that this is probably the most accessible to readers not familiar with the Ambergris setting yet it's also the most rewarding to those who've followed the series.
Posted by Charles at 6:53 AM

You capture Finch well. I loved it, and I definitely came to it from the first perspective, although I was at least partially aware of the 2nd even though I've not read the first two books.