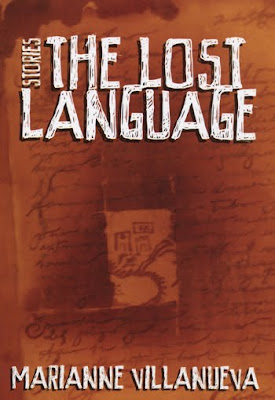 In a certain way, Marianne Villanueva's short stories feel like Joy Dayrit's in the sense that she invokes elements of speculative fiction without intending to write for the genre--although one of the stories in this collection has been reprinted in Philippine Speculative Fiction and another undoubtedly has mythical elements to it. In terms of sensibilities, on one hand, The Lost Language features stories that have a literary bent, whether it's the focus on the characters, their domesticity, and the ambiguous ending that provide little sense of closure. Compounding this is the fact that the protagonist is usually an elderly female with the conflict revolving around loss of some sort. In this, there's a sense of formula to Villanueva's writing, a faithfulness to what is expected by the academia rather than surrendering herself to her muse.

On the other end of the spectrum, we have fiction which is liberating as Villanueva successfully experiments and lets the narrative flow naturally. The best example of this is "Alex" where the protagonist imagines the life of his co-worker, the Alex of the title. Villanueva seamlessly jumps from perspective to perspective, building on the mythology that is established early on. This isn't a piece that jumps out as horror, but there's something terrifying at how the protagonist's obsession with Alex grows, especially by the time we reach the end. And then there is the titular piece, "The Lost Language", which is composed of seemingly disparate accounts but form a unified whole to create a story that's not easily categorized--and that's a good thing.

Overall, The Lost Language is a mix of hits-and-misses. There's no outright unlikable story, and it's clear that Villanueva is talented when it comes to the craft of writing, but there are pieces where her fiction is constrained by what is considered literary writing. Still, when she does break out of that mold and gets into her groove, Villanueva astounds and amazes.
Posted by Charles at 6:44 AM

Thanks for the review. Just want to clarify: I've never adhered to any formula in my writing -- never have, never will. But if you mean that my stories seem to follow a certain pattern -- with the "elderly female protagonist" and so forth and so on, well, writers do explore certain themes in their work, themes which seem to be worth exploring, over and over again.

Where the heck did you find those "elderly females"??? You mean, in "The Hand"? Or was that in "Dust"? Because many of my stories are written from a child's or teen-ager's point of view: I'm thinking of Dumpster, Dumaguete, Gerry Dreams the Ocean ...

The initial stories felt it had elderly females. The formula I felt wasn't so much on the elderly females, but the pattern that it tended to focus on domesticity, slice of life, and the low-key ending.