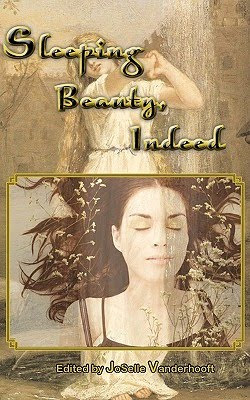 Sleeping Beauty, Indeed & Other Lesbian Fairy Tales isn't a new anthology but has recently been re-released in paperback form by Lethe Press. My initial impression is that with only ten stories and under two hundred pages, this is a very thin book. However, that judgment was premature. Editor Joselle Vanderhooft aims for quality over quantity and that's not an empty boast. It's not often that I run across an anthology where each story grabs my attention and there's honestly no bad story to be found. Another element that's praise-worthy is how Vanderhooft consistently compiles stories that sound like fairy tales, albeit ones with a lesbian agenda. In a certain way, being aware of this subversion can diminish the impact of some stories (in the same way that a horror reader can brace for the impact of a horror anthology) but overall, this accomplishment should be highlighted.

I'm by no means a fairy tale expert so thankfully, most of the stories here work well without being aware of the original fairy tale they're based on. On the other hand, some stories sound original, while others revel in its metafictional qualities.

What impressed me with "Two Sisters" by R. Holsen is the author's writing style and how she retains this consistency. Related to this is the way she crafts the dialogue of her characters and their motivations. I'm amazed at the direction this story went, and how it tugs the reader's emotional strings.

"Bones Like Sugar" by Catherynne M. Valente is overtly subversive and is in many ways classic Valente with her elaborate and beautiful descriptions--even as the author tackles a dark subject matter. While it might work independent of Hansel and Gretel, for me it made its big impact because of how Valente inserts a new perspective on this familiar narrative.

"The Mute Princess" by AJ Grant has the subtitle that it's based on a Yemeni Fairy tale and that's perhaps the only clue that would make you think this wasn't crafted whole cloth. This is one of the stories that faithfully mimics the conventional form of a fairy tale and including all its tropes, from repetition to the wise phrases. Enjoyable because of its faithfulness to being a fairy tale (as opposed to being a modernized rendition of the story).

"The Seduction and Secret Life of Deirdre Fallon" by Frank Fradella distinguishes itself not only due to the epistolary format but the Victorian atmosphere as well. I wouldn't call this one of the strongest stories in the anthology, but its unique characteristics does make it stand apart.

"Sleeping Beauty, Indeed" by Regan M. Wann is a light story as it injects humor and modern qualities into a popular fairy tale. The narrator's tone is commendable as it possesses a certain beat.

"Future Fortunes" by Kori Aguirre-Amador is this fun, adventurous story and uses an interesting perspective. Given the theme of the book, the mysterious element of the story is easily guessed although that doesn't detract from the rest of the action (action being the operative word here).

"Undertow" by Meredith Schwartz successfully combines two fairy tales we don't normally associate with each other and while I liked the initial hook, what stands out more is the somber mood at the end of the piece.

"Voce" by Kimberly DeCina is ingenious in the first part of the story as it makes you sympathetic to the narrator before subverting your expectations. I'm still not convinced by the change in behavior of the protagonist, but DeCina does make a good attempt. The other elements flow naturally and DeCina includes enough detail to make the setting feel genuine.

"Bird's Eye" Erzebet YellowBoy features elegant language and much like "The Mute Princess", feels like an original fairy tale. The plot won't win you over, but the language and descriptions will.

"Coyote Kate of Camden" by Julia Talbot is an interesting Western "re-skinning" of another familiar fairy tale and that's the strength of this piece--that fact that the elements of an old story was successfully implanted into a new setting.

Tight and consistent, Sleeping Beauty, Indeed & Other Lesbian Fairy Tales has all the elements of a successful themed anthology, and actually reminds me of Ellen Datlow and Terri Windling's fairy tale anthologies.
Posted by Charles at 5:42 AM

I noticed you received an e-copy of this book (Sleeping Beauty Indeed). I have the hardback version and am missing page 81 of the text (the entire page is blank). Other reviews reveal the same error, so the reader is left guessing at the end, which is a shame.

Is there any way you could check your version and email me that story? I really loved that story but really want to find out what happens in that missing page.