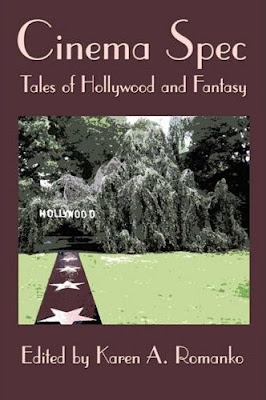 As you might have guessed, Cinema Spec is an anthology of flash fiction, in addition to short stories (that are short enough that they might as well be considered long flash fiction) and poetry revolving around the theme of the cinema and speculative fiction. What the anthology does right is that considering its content, it's appropriately short at 168 pages. I don't think I can stand 400 pages reading this stuff, even if it's full of the best flash fiction and poetry in the world. A longer anthology would also sabotage its own effectiveness, as there are simply too many stories to keep track of and by the time the reader is done reading all of them, even the better-written ones will be forgotten. This also goes hand in hand with the pacing and sequencing, and in that sense, Karen A. Romanko does a good job.

The key to writing effective flash fiction is that there should be a dominant emotion by the end of the story. In a certain sense, horror is one of the most suitable genres as there's a clear goal for the author on what to elicit from the reader. So it's not surprising that the stories I enjoyed here do just that: "Sundowner" by by Paul Milliken, "The End" by Lisa Morton, and "Family Movie" by J.C. Runolfson. These stories manage to adapt the tropes of horror into a compressed format and probably wouldn't have worked elsewhere. There's a clear introduction, set-up, and revelation. Not that all flash fiction needs to be horror however. "Oracle in Chains" by Rodello Santos for example works because one feels the exhaustion and weariness of his protagonist. "The Shadow-Witch" by Tony Pi, on the other hand, builds a mood and satisfies the sense of continuity demanded by the piece.

I wish this was an anthology full of winning stories but that's not the case. There are a few that are competently-written but fail to master the rhythm of flash fiction. The opening story, "Lori" by Connor Moran, is predictable and left me empty. "Screenings of a Silent Film" by J.S. Bangs does nothing for me and simply could have been a paragraph of description. "Shadowdancer" by Robert A. Desharnais elicits the reaction "that's it?" The rest fall under the middle area of good but forgettable. I had to go through the book three times just to make my assessment and while I do find them to be decent when I initially read them, the fact that I couldn't pinpoint them from the table of contents alone says something.

When it comes to the poetry, this anthology is nothing to sneeze at. Not so much in the arena of wordplay as much as narrative, rhythm, and beat. Favorites include "The Precinct of Night" by J.E. Stanley, "TV Tea" by Ruth Berman, and "Reel People: The Extra's Lament" by Robert Borski. It's not a 50/50 split between poetry and fiction, but whatever poetry that's included is competently written.

I wouldn't call Cinema Spec a literary heavy-weight by any means, but it's a decent novelty with its own fair share of gems. Considering my bias against flash fiction, the fact that some of the selections remained memorable is praise-worthy.
Posted by Charles at 5:45 AM