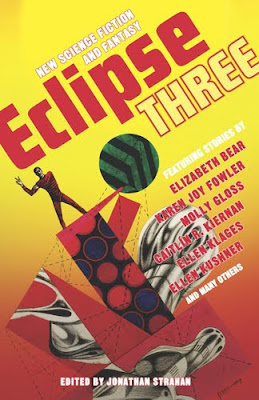 Eclipse Three's has one of the more unique introductions as a good portion of it meditates on the book's cover, illustrated by the late Richard Powers. I can't fault Jonathan Strahan as there is something bizarre with Powers' illustrations. As for the lack of explanation as to what kind of stories to expect, that's probably a positive omission. A lot of the featured pieces aren't overtly fantastical or science fiction initially (although there are exemptions such as Jeffrey Ford's "The Coral Heart" or Daniel Abraham's "The Pretender's Tourney"), and even dips its toes into horror. In fact, there are probably some stories where their speculative nature is in contention, and while some readers might be dissuaded by this, the point of Eclipse Three is that it wades into areas which are not easily categorized and revels in their mystery.

There are two previous anthologies which I've come to associate with Eclipse Three. One is Ekaterina Sedia's Paper Cities: An Anthology of Urban Fantasy because a couple of the stories here could have easily fit that theme. And we're talking about urban fantasy in the sense of fantastical stories that takes place in the real world, as opposed to the type that has been confused with paranormal romance. The other is Ellen Datlow's The Del Rey Book of Science Fiction and Fantasy, mainly due to the gravity of the stories and the type of fiction that it'll appeal to. This isn't space ships and ray guns or dragons and wizards. Instead, there's a more literary focus, with stories either focusing on the characterization of the protagonist, or usurping the norms we usually associate with them. While I'm not a fan of all fifteen stories, each one admittedly packs a punch.

What's exciting with Eclipse Three's fiction is that the thrill is subtle; it slowly creeps up on you until it dawns, instead of specific point where you have a eureka moment. For example, Pat Cadigan's "Don't Mention Madagascar" amazed me, everything from the title to the hints sprinkled throughout the narrative. There are two authentic character voices to be found here and I'm honestly less concerned with pegging this as either science fiction or fantasy, but focused more on the literal journey of its two protagonists. It's not the sort of adventure that's life-threatening or unbelievable (at first), but the way Cadigan strings them together and culminates to a larger tapestry makes this a worthwhile read.

Ellen Klage's "A Practical Girl" is another standout piece as the author creates a credible atmosphere and for the first part of the story, the reader is lulled into thinking things are normal. While the inclusion of mathematics isn't as elegant as Yoko Ogawa's The Housekeeper and the Professor, for a short story, this included element doesn't feel forced and flows naturally to take center stage. Much like "Don't Mention Madagascar", the events that take place might seem like a simple task, but they are epic challenges to the character, and Klage conveys that emotion effectivey.

Nicola Griffith's "It Takes Two" has a rhythm that's compelling right out of the gate. The author's sequencing is commendable and heightens the tension of the story. There's enough concepts here to satiate science fiction fans while equally satisfying the mundane science fiction crowd. Personally, I liked the execution and the way Griffith makes her characters sympathetic. The crisis here isn't so much a physical obstacle as much as it is psychological one, which makes Griffith's characterization all the more praise-worthy.

When I got a hold of this book, there was genuine interest and it didn't disappoint. Of course I'd like to think that I'm not a conventional reader as I enjoy skirting the borders. If you look at the series as a whole, each volume manages to be different from what came before it. I wasn't a big fan of Eclipse Two and I still think Eclipse One is still one of the bests, but Eclipse Three impresses me with its daring and is actually the kind of fiction I'm looking for.
Posted by Charles at 6:14 AM

Hey, thanks for that. I'm glad you enjoyed it. I'm looking forward to reading the stories myself at some point...

Very glad you liked "Don't Mention Madagascar" (your review will keep a smile on my face all week). Just FYI: the title comes from Allen Varney, who made it up about 25 years ago in the course of a spoof review of a non-existent anthology. I told him I was going to write the story eventually. OK, I can check that off on the to-do list. Now to clean the house...