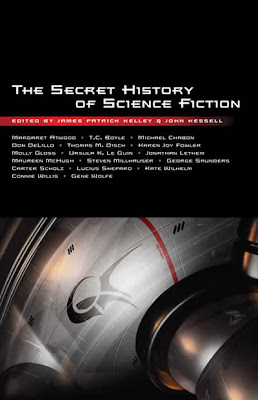 The Secret History of Science Fiction -- sounds like the title of a blockbuster movie or exhaustive nonfiction book but this is, in fact, an anthology that features stories that bridge the literary vs. genre divide, or "li-fi" as Orson Scott Card would put it. The book includes authors who are considered literary but has written fiction which could be considered science fiction as well as science fiction authors who've successfully crossed over to the mainstream to some extent.

What's impressive with the introduction by editors James Patrick Kelly and John Kessel is that it has a narrative to it. It starts with a reaction to an essay by Jonathan Lethem which posits what if Thomas Pynchon's Gravity's Rainbow had won the Nebula Award, instead of Arthur C. Clarke's Rendezvous with Rama. Would this have indeed reconciled two opposing genres (the literary mainstream and science fiction)? The editors debunk this myth and along the way, we hear familiar arguments, such as the bias against science fiction by the rest of the world. The pair however temper their views with how science fiction fandom has also been unfair to writers who've transitioned to the mainstream. The aim of this book is to somehow bridge that gap (can't we all just get along?). This is the anthology you give to your literary professors, the ones who profess that they don't read science fiction. Alternatively, this is the same book you give to people who've never read anything else but science fiction.

Much like Tachyon's previous anthology, The Very best of Fantasy & Science Fiction edited by Gordon van Gelder, this could easily double as a history book of the genre, especially with all the notable authors it includes, from Ursula K. Le Guin to Michael Chabon. Even Fiction (with a capital F!) readers must acknowledge writers like Margaret Atwood and Jonathan Lethem. There's a lot of tension in this book, reflective of the two-seemingly opposite worlds of genre and non-genre. On one hand, some stories are idea-centric (the stereotype of science fiction), while others are character-oriented (again, a stereotype of literary fiction). Compounding this are the quotes preceding each story (save fore the last): the first is from the author of the story detailing his or her writing ethos; what follows are statements from one or two contributors, usually stating an anti-thesis or contrary opinion.

The two genres are so blurred that an interesting experiment would be to strip the stories of their titles and their authors, and make unsuspecting readers wonder whether they were originally considered a science fiction story or a literary story (which actually isn't too hard, considering the book lacks a proper biography--intentional or accident?). And honestly, at this point in the review, I'm sick of using "literary" and even "science fiction" as a descriptor, because as the stories here prove, the distinction between the two isn't as clear-cut as some critics would make it so. And because I'm not the most well-read of reviewers, there were some authors whose stances on the divide I was simply unaware of. And you know what, that's probably for the best. These are terrific stories, irregardless of your biases for or against the authors.

Nineteen stories are featured in the book and more than a few are my favorites: "The Ones Who Walk Away from Omelas" by Ursula K. Le Guin is just as powerful as I remember it; "Ladies and Gentlemen, This is Your Crisis" by Kate Wilhelm is like wine: it gets better with time and feels more relevant with the advent of reality TV; "Homelanding" by Margaret Atwood is a memorable flash fiction story that's on par with Ted Chiang's "What's Expected of Us" although for different reasons: her disassociation of the familiar makes her thesis all the more relevant; "Interlocking Pieces" by Molly Gloss is compact and tight yet conveys so much in her brevity.

In fact, the fiction selection is so strong that there are only three stories which didn't blow me away, although they're undeniably competently written. A more valid criticism of the book isn't in the quality of the stories but in the choices. As a friend pointed out to me, if the theme of the book is the "secret history" of the genre, why did the editors include their own works? It's not that their pieces aren't well written--I actually loved them--but neither Kelly nor Kessel have really been associated with mainstream literature. Of course if there were genre writes who were to make such a transition, Kelly and Kessel would get my vote, not just due to their writing style, but their actual profession as well (and in fact, these qualities make them ideal editors for this anthology), but at this point in time, the inclusion of their stories leaves room for doubt.

Overall however, The Secret History of Science Fiction is a fantastic anthology. It covers a theme that's fresh but poignant, and there's a strong selection of stories that would have otherwise been unread (whether you're a mainstream reader or a die-hard genre fan). The selection of quotes alone is worth the price of admission, as they summarize many of the debates we currently discuss. Whenever there's a literary vs. genre argument, this is the first book that one should bring out and realize the distinction--or lack of distinction--there is when it comes to fiction.
Posted by Charles at 5:45 AM