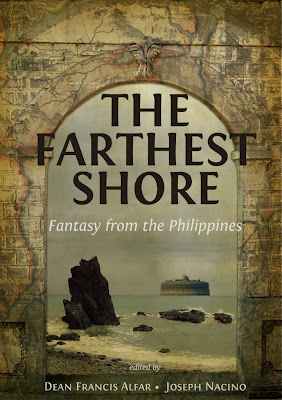 When the announcement for the table of contents for the book first came out, it was honestly underwhelming. There were originally ten stories, two of which were reprints from Philippine Speculative Fiction Vol. 1. To bolster the roster, the editors each contributed a story. Not that I felt this was necessary, considering this was an electronic imprint and there are no word count quotas, but there is nonetheless an expectation than an anthology should deliver a variety of stories. In the introduction, Nacino mentions that the theme of the book is secondary-world fantasy, although whether it should be a story free from distinct Filipino qualities ("...we wanted to create worlds without any recognizable sign of anything Filipino on the horizon") or not ("...we should also write about our own Filipino world") is a bit confusing. Judging from the selections, both types apply.

Given my low expectations, a couple of the stories were pleasant surprises. I expected the anthology to be filled with sword-and-sorcery narratives along the lines of your D&D campaign and while there are those types of fiction here, I'm impressed at how some of the writers make the most of what they consider secondary-world fiction. "The Just World of Helena Jimenez" by Eliza Victoria, for example, juxtaposes the real world with the fantastical, alternating between one to give context to the other, although admittedly it's the form that impresses me more than the story. A noteworthy piece is "Spelling Normal" by Mia Tijam, which has a cyberpunk feel and is this weird mix of Terry Bisson's mastery of dialogue combined with Ysabeau Wilce's esoteric language. If I weren't aware of the anthology's parameters, I easily could have considered this science fiction but it nonetheless works as a secondary world piece and is easily the most daring of all the stories here.

Strangely enough, what I felt were the strongest stories in the anthology were the straight-up sword-and-sorcery narratives, although the authors subvert your expectations. While some might contend the practice of the editor including their own work in an anthology, "Strange Weather" by Dean Francis Alfar leaves no doubt as to the merits of its inclusion. It's the first and one of the longest stories but manages to elicit a lot of emotions ranging from insight, wonder, laughter, suspense, to romance. Another lengthy but wonderful piece is "Light" by Kate Aton-Osias which utilizes a unique perspective when it comes to your RPG spellcasters and is rooted with powerful characterization.

There's a couple of other good stories such as "Wildwater" by Crystal Koo and the Philippine Speculative Fiction Vol. 1 reprints. Interestingly enough, these are the stories that successfully combine Philippine culture into their secondary world settings. The others, while not horrible per se, failed to transcend competency. "Rite of Passage" by Dominique Gerald Cimafranca, for example, was too short and not surprisingly had little pay-off. "Siege of Silence" by Paolo V. Chikiamco is the opposite as it falls into the trap of a short story wanting to be a novel, and the best example of this weakness is his large cast of characters who produce no emotional attachment, and the larger focus of the narrative on the plot. And "Brothers in Arms" by Joseph Nacino, while one of his better-written works, is simply mediocre and lacks a certain gravitas.

Overall, The Farthest Shore: Fantasy from the Philippines is a welcome influx of new stories. All but one of the contributors are veteran writers in the genre and while there are stories that remain lackluster, there's enough gems to redeem the anthology.
Posted by Charles at 6:45 AM