Book/Magazine Review: The Best Horror of the Year Volume One edited by Ellen Datlow

Disclosure: The publisher sent an electronic review copy for the purposes of this review. 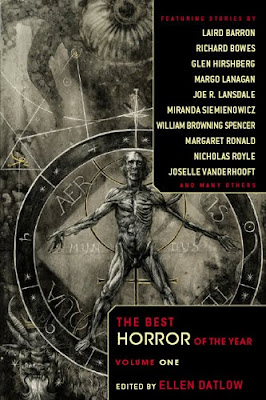 With the demise of The Year's Best Fantasy and Horror, The Best Horror of the Year Volume One by Ellen Datlow is touted as the successor--at least as far as the horror aspect is concerned. That's a pretty accurate assessment and this anthology includes many of the elements which made the previous book successful. For example, right after the table of contents is an introduction/summation of the 2008 horror field. It's quite comprehensive, tackling everything from awards, novels, magazines, etc. What's lacking is the coverage on non-print popular media such as movies, and that's perhaps the first clue that this book is more focused compared to its predecessor (and that's not necessarily a bad thing). Datlow's summation, in my opinion, distinguishes this anthology from the other "best of" anthologies out there--with Gardner Dozois' The Year's Best Science Fiction being the exception: it provides unique, non-fiction content that immediately gives an overview of the field and if there's anything that best exemplifies why Datlow is the most qualified person to select a "best of" anthology, this is it.

Next is the actual story selection. First, I'd like to talk about the format. Not that there's a lot of variation in terms of story presentation in the various best of anthologies, but The Best Horror of the Year is significantly different from The Year's Best Fantasy and Horror. The authors don't get bios in the story nor is there a brief explanation as to why it was chosen by the editor. On one hand, you can see it as the editor being direct and not interfering with the reader's expectations. On the other hand, it might be an element that might not be a deal-breaker, but reminds us that this book is different. Personally, I miss the author bios, but not the editorial comments. Sometimes, it's best to gauge the story on its own merits, instead of others telling you their reasons for liking a certain piece.

The second point I'd like to talk about is that I'm not really well-versed in horror as much as I am with fantasy (and to a certain extent, science fiction). So this is one of those reprint anthologies where I'm in the dark. There are a few titles that I'm familiar with but for the most part, the selections are pleasant surprises. Another aspect that's special to Datlow is how she doesn't neglect the poetry scene. There's not a lot of them (two by my count) but the editor also includes poetry horror pieces. There's also a flash fiction piece here, "It Washed Up" by Joe R. Lansdale, but I'm not thrilled when it comes to very short work and it's no surprise that it failed to resonate with me.

In terms of the fiction, not every story is a winner, and it's been my experience that Datlow goes for the slower but well-developed pieces. That hasn't changed and is best evidenced by standouts such as "If Angels Fight" by Richard Bowes and "The Goosle" by Margo Lanagan. There are, however, some upbeat pieces which are striking from the get go: "Penguins of the Apocalypse" by William Browning Spencer is this brilliant morality tale that utilizes the most unlikely of animals as a cue for horror. "Harry and the Monkey" by Euan Harvey has a unique voice and style, short and catchy but doesn't neglect the elements that make it frightening and potent. "Loup-Garou" by R.B. Russell feels like it's another of those stories that uses the horror trope about a rare film, but actually presents a unique take on it that makes this feel refreshing.

What rounds up The Year's Best Fantasy and Horror is an honorable mentions list. It wasn't included in the electronic copy I received, but from my understanding, an abridged version should be included at the end of the book. Readers who are interested in the honorable mentions list can find it at the publisher's message board, and while I do want the longer list to be included in the actual The Best Horror of the Year, this is probably the most feasible concession (and thankfully, I'm not an electronic luddite, although it would be helpful if the message board link was included in the book's description at the publisher's website).

Overall, this was a pleasant read, especially coming from someone who's not entrenched in the horror genre. As I've mentioned in previous review of The Year's Best Fantasy and Horror reviews, the summation alone is worth the price of entry--easily a guide to the field for those not updated with its minutiae. The fiction is solid and sophisticated, reflective of the editor's taste when it comes to a writer's skill and talent. I do like the expectation that this is a horror anthology (as opposed to not knowing whether it's fantastical, horrifying, or both) and Datlow covers a wide variety as far as that is concerned. The biggest selling point for me is that this is a legacy anthology albeit with a new name. Whether Datlow will remain faithful to its predecessor (an established, working formula) or carve out new territory with Night Shade Books remains to be seen but so far, this is more of the former and that's not necessarily a bad thing.
Posted by Charles at 6:43 AM