"It is one thing to be a lover of reading, like I am, like you are. But if we were all readers, there would be nothing to read if no one were to write." - Dean Alfar

Last Saturday, I was at the Write or Die workshop where Dean Alfar gave a two-hour talk on novel writing. For a good few minutes, I was manning the projector when a client called and I had to immediately depart to take the call. Dean's best friend, Vin, seemed to handle the PowerPoint duties quite well. What can I say, the event was packed and Powerbooks was grabbing chairs and benches everywhere, including their own cafe. Writers at the event include Nikki Alfar, Alex Osias, Kate Aton-Osias, Kenneth Yu, Michael Co (which I recognized from listening to Anansi Girl's podcast ), and the ever-elusive F.H. Batacan. Comic artist Wilson Tortosa was also in the crowd while the event was deftly handled by Read or Die members Giyenah and Innocentlyjaded.

The Event Organizers and Their Sponsors:
Links Mentioned by Dean Alfar:
Pinoy NaNoWriMo:
Several Filipino participants from NaNoWriMo also made an appearance during the event (they were occupying the front seats).
Photos Courtesy of Kenneth Yu (Philippine Genre Stories) 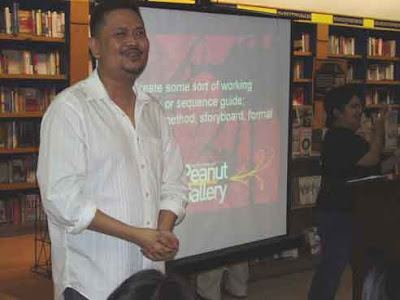 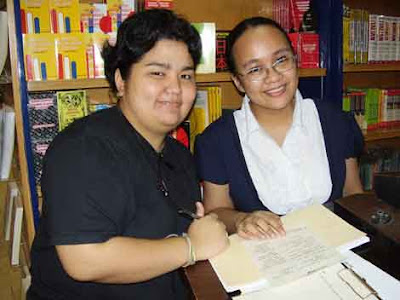 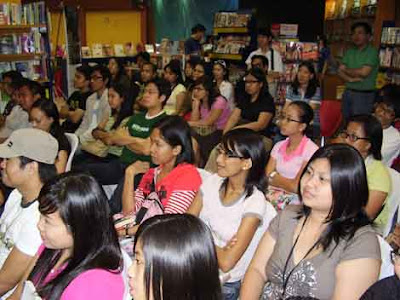 The Audience (believe it or not, there were more people who showed up later on)

Write or Die: Dean Alfar (work in progress--hopefully I'll be done before the Ad Congress but everything won't be transcribed by tomorrow!)
Posted by Charles at 10:09 PM

thanks for your hard work, Charles! And I know how hard transcribing is :)