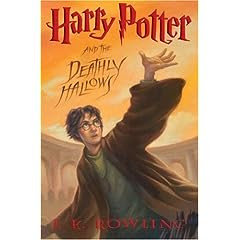 I managed to snag a copy from a friend and for any Harry Potter fan, this is essential reading solely for the fact that it gives the series closure. In that sense, the novel does its job. As far as everything goes, it's competent and nothing really stands out. Rowling does give readers a real sense of danger and while death in the previous Harry Potter books has been restrained, Rowling doesn't hold back in this book to the point that some deaths seem arbitrary. The characterization of various characters are fleshed out in this book, including the most enigmatic of cast members, Albus Dumbledore. To Rowling's credit, with the exception of Voldemort, her characters are three-dimensional and not mere cardboard stereotypes. That's not to say everyone was explored. I think one motivation that wasn't really explored were the Dudleys but for the most part, the rest of the cast is covered. The tone of the book is perhaps the most serious and the novel begins in the middle of the action, even breaking the school trip formula which the previous books have established (and justly so considering the threat Voldemort poses). Overall, it's a must-read for fans of the series, but as a stand-alone book, it's decent enough (although the deaths might surprise them). It's not the strongest Harry Potter novel but neither is it the weakest and what it has going for it is the mysteries it solves.

*jumped giddily seeing the DH review* SPOILER WARNING! AND YOU SLOWPOKES DESERVE IT. ^_^

I agree with all your comments, Charles, except that I think none of the deaths are arbitrary at all.

Hedwig's= an end to Harry's childhood

Dobby's= one of Harry's devoted. He has to go.

Lupin's= the Marauders are now reunited in the afterlife

Tonks's= she joins her father and husband... and her leaving prompts her mother to rejoin the magical community and heal (Andromeda shunned and has been shunned).

Fred's= the one blight to the Weasley family's victory. JK said it should have been Arthur, but then we can all say either twin is a spare, hehe. His dying also tempered down George and made him less of a trial.

What you pointed out are good points (and in fact I missed some of them) but I also like to think that I carefully choose my words (as the review itself is already sparse).

Note that my exact statement was "some deaths seem arbitrary".

Also, despite the metaphorical context in which you have pointed out, some of the deaths do have the appearance of being arbitrary because there is not much focus placed on them, perhaps due to the sheer amount of events going on and the atmosphere that Rowling is trying to establish. (That's not to say that every death scene should be long and dramatic.)

But again, this is all just my opinion.