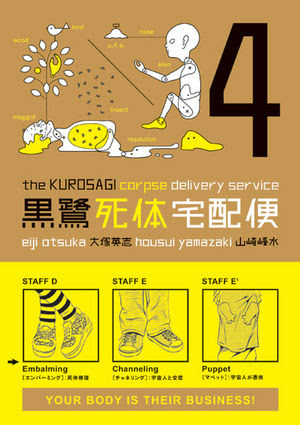 The last time I reviewed the series, it was on a high note, with Vol. 2 ending a story arc. Vol. 3 stars off anew with the stand-alone stories, this time fleshing out the characters more and exploring their motivations and morals. In that sense, it's more of the same like Vol. 1 albeit there are some weird moments and there is the introduction of a new significant character. Overall nothing to rave about and if you already like the series, it won't change your opinion.

Vol. 4 for me was a lot more appealing than the previous volume, even if it still follows the episodic formula. However, what sets it apart from the rest is how Otsuka manages to weave in conspiracy theories and simply far-out weird narratives that easily remind me of Philip K. Dick's Ubik. For example, we have an alien sentience that's trapped in the corpse of a Russian space monkey and the group has to figure out what he's saying and what his request is. Other than that, if you didn't already like The Kurosaki Corpse Delivery Service, I doubt if there's something in here that'll convince you. It's really a mediocre title with interesting concepts without the emotional investment of a long story arc.