Plug: Contest: Are You An Agent of Chaos? 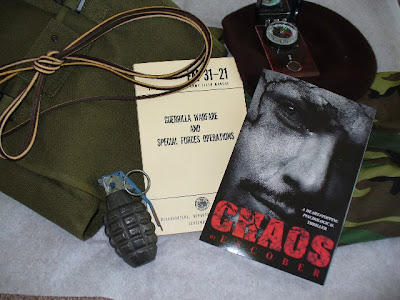 Have you ever struck a blow for anarchy? Done something surreal just because it felt good and they couldn't stop you? Crossed the border just to say you had? Stuck your gun somewhere you shouldn't've? Been chased across countries while trying to remember who you are? Okay, so that last one is the novel "Chaos" by the hot Dutch writing couple Escober, but you get the point. Tell us about the biggest thing you ever done to spread "chaos" and we'll enter you in a drawing for a one-of-a-kind gift pack featuring our new book "Chaos", plus:

(1) camouflage T-shirt, suitable for disappearing without a trace

Send your story of complete chaos to deepeight@live.com before June 30, 2009 to enter.

a heart-stopping psychological thriller, in English for the first time.

When British soldier alex Fisher returns home from his tour in Bosnia, he’s plagued by blackouts, recurring nightmares, and uncontrollable acts of violence. Escaping to Mexico, he sets off on a globetrotting tour in an attempt to distance himself from the demons in his head. a chance meeting with a mysterious woman introduces Fisher to a far more passionate—and far more dangerous—life. With his grip on reality slipping, Fisher’s demons return in full force, awakening a flood of suppressed memories. as he attempts to sort through his complicated and half-remembered past, Fisher discovers that the truth is harder to accept than the lies.