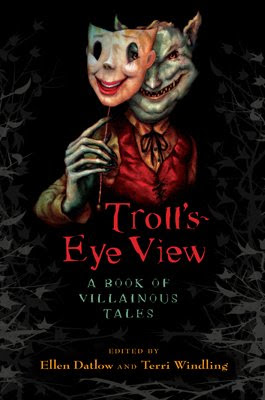 Fairy tales--reinvented or inspired--are nothing new to the duo of Ellen Datlow and Terri Windling. Perhaps what's remarkable is that for the past few decades, they've managed to edit fairy tale anthologies that cater to all sorts of audiences, from adults (Snow White, Blood Red), young adults (The Green Man), to young readers (A Wolf at the Door). It's the first two that I'm most familiar with so Troll's Eye View: A Book of Villainous Tales caught me by surprise. It's quite the petite book and at first glance looks rather slim. It has a striking cover but what sells the young readers vibe is the entire layout, such as the silhouette of bushes to the large typeface.

What prospective readers should be aware is the target audience of this book. The content is very different from Datlow and Windling's other anthologies, and all fifteen stories/poems are clearly written for a younger age group, especially with its familiar tropes and simple plots. Even the acknowledgments ("For Mom, who read me all the stories. - Ellen Datlow. To Ellen's mom, because I'm so glad she did! - Terri Windling") conjures that atmosphere from the get-go and made me chuckle. While there's an Introduction and a Further Reading list, they're brief and mostly invisible.

With this anthology's perfect readers in mind, there's a great synergy in all the stories and the poems. The tone is consistent and there's a wide variety while still sticking to the theme. It accomplishes this through a change in perspective, a secret history, or simply an entirely new story that draws inspiration from fairy tales. When it comes to the stories, they are first and foremost stand-alone pieces which require no foreknowledge of the said fairy tales--although awareness of the original leads to further nuances and layered readings. Admittedly, that's not the case with the poems, which require some familiarity with the subject matter. Joseph Stanton's "Puss in Boots, the Sequel," for example, requires Puss in Boots for its context. It also took me some time to puzzle out Neil Gaiman's "Observing the Formalities," although new readers can appreciate it for the form and repetition.

I can honestly say all the stories and poems were great, working on multiple levels but the surface level being just as important. Of course me being a mature reader, certain pieces had a stronger impact on me than others. I enjoyed the beat and rhythm of the poem "Faery Tales" by Wendy Froud. It's dying to be read out loud and all you need to know is in the text, at the same time alluding to a veritable collection of fairy tales.

Catherynne M. Valente's "A Delicate Architecture" stands out for me because the author easily crafts her own new fairy tale yet she does it so convincingly that you'd think it was part of the original tapestry all along. She accomplishes this through the combination of tropes she utilizes: a doting father, a female protagonist, an absurd amount of confectionery, and a mystical transformation that makes sense when you look back at it. Not to downplay the other strengths of the story of course, such as Valente's wondrous descriptions and vivid imagery.

A story that veers off the most from formula is Kelly Link's "The Cinderella Game" but I enjoyed it because of just that--its originality and spunk and daring. While admittedly Link's other short fiction might be too experimental for most people's comfort, this story is one of the author's more accessible stories and it follows a fairly straightforward plot and premise. That's not to say it's devoid of complexity and as Kelly Link mentions in the afterword, any of the characters could easily be the villain, and this isn't the sort of story that's clear-cut black and white. The characters sound genuine and their banter is what carries the narrative, in addition to what's restrained and not mentioned.

Overall this was a welcome surprise and if the package is cute, that's because it's also reflective of the content. Troll's Eye View is this combination of simple stories and subversion but at the forefront is its accessibility and young reader charm.
Posted by Charles at 7:04 AM