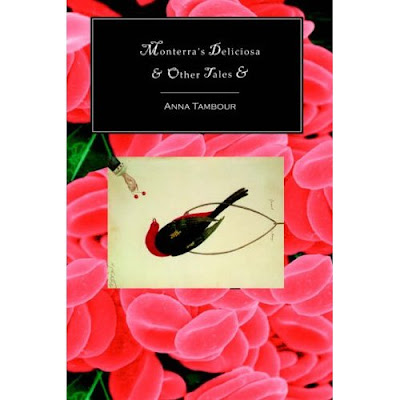 Anna Tambour for me is one of those underrated speculative fiction authors. Her fiction has graced the pages of a few publications and anthologies but there hasn't been much fanfare when it comes to her writing. In 2003, Prime Books released her short story and poetry collection, Monterra's Deliciosa & Other Tales &.

How best to describe Tambour's style? On one hand, we have Tambour in her lengthy and descriptive mode, which is the case in "Klokwerk's Heart". While there's a central concept surrounding that particular story, it's the telling details that shine through, from the monotonous occupation of its protagonist to the item that becomes central to the story. The author utilizes simple words but there's an elegance in the way she uses them in a sentence, almost like composing a melody.

On the other end of the spectrum, we have Tambour tackling a very brief piece, with the concepts distilled to their core. An example of this is "Temptation of the Seven Scientists" which follows a specific structure and there's a charm when the author names her characters S1 to S7. In the case of this story, it works on multiple levels, and the ending has that right mix of ambiguity and weirdness.

What's evident in this collection is that Tambour oscillates between her two styles, sometimes mixing and matching, at other times simply going for a flash fiction piece that instantly satiates. In a certain way, the author reminds me of Zoran Zivkovic's style, the way the latter uses simple language elegantly and his fascination with the bizarre--a Kafka minus the frustration and helplessness. But Tambour goes beyond Zivkovic and there are times when she's playful with her mastery of language--and when it does, the reader is wowed by her skill and magic-realism sensibilities. Her characters also have quirks, often eccentric but right from the get go resonates with the reader.

The last story I want to tackle in this review is "Monterra's Deliciosa." In many ways, this is Tambour's epic. Whereas the other stories simply feature a palette or two of Tambour's technique, this story manages to include all of them. There are several nuggets of micro-stories in here, usually in the form of a character's history or background. Description is at the forefront as well, such as the protagonist's cooking that easily whets one's appetite (even when it's the most unappetizing dinner in reality). There's a gamut of personalities here, not quite virtuous but neither are they villains. Tambour gives us a world tour, and doesn't forget to include humor in this story. The last line alone is funny in multiple ways...

There's a lot of flash fiction in Monterra's Deliciosa & Other Tales & but what I really enjoyed in this collection is the freshness of the stories and when Tambour gets in the groove of her longer narratives, it's a pleasure to unravel them.
Posted by Charles at 7:06 AM