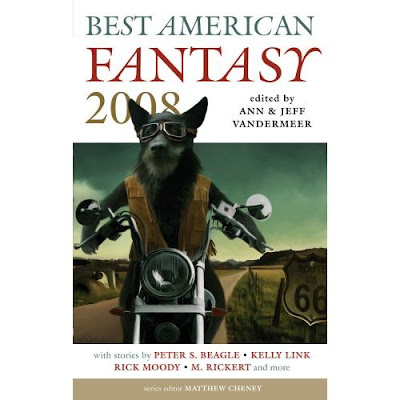 The appeal of Best American Fantasy 1 for me was how it included stories from venues outside of what you typically consider genre yet when you read them, they blow you away. Thankfully, Best American Fantasy 2 lives up to that expectation as amidst including works from publications like Weird Tales and The Magazine of Fantasy and Science Fiction, there are stories from Harpers Magazine and McSweeney's.

My honest reaction to the anthology is wow, I missed a lot of great stories from 2007. I really enjoyed majority of the selected prose, each one having a more literary bent and challenging our definitions of what we typically consider fantasy, in addition to each story being different in form, style, and presentation from the one preceding it. Rick Moody's "Story With Advice II: Back from the Dead" for example combines the advice column with a deceased narrator creating a unique tale, while Matt Bell's "Mario's Three Lives" tackles the ludicrousness and helplessness of a popular video game character.

What's also impressive is how some genre stories I've overlooked or aren't as lauded fit within the context of the book's criteria. Michelle Richmond's "Logorrhea" for example is a story I initially read in John Klima's anthology of the same name but it's only now that it makes a heart-wrenching emotional impact on me. I hadn't heard much of M. Rickert's "Memoir of a Deer Woman" but it's similarly a powerful piece and is one of those stories that showcases the strengths of speculative fiction.

There are, of course, stories which I expected to be included in this book, including "The Last and Only, or, Mr. Moscowitz Becomes French" by Peter S. Beagle and "The Drowned Life" by Jeffrey Ford. It's the culmination of the entire selection however--how tight and varied the stories are--that makes Best American Fantasy 2 a great read. Of course I am biased in my taste in the sense that I'm looking for these kinds of experimental and literary fiction, less Hugo Awards and perhaps more along the lines of the fantasy equivalent of The Shirley Jackson Awards.

If you're looking for depth and gravity and variation, this is a must-have anthology, especially considering how it features stories from venues that a myopic genre reader wouldn't even have heard of (at least that's the case with me). Again, the slant is more towards a literary style, but that editorial bias also ensures that it has little overlap with the other "best of" anthologies.
Posted by Charles at 5:48 AM