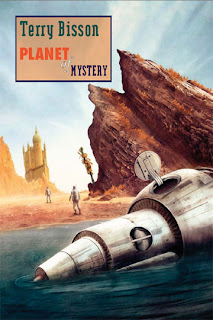 Bisson's short fiction has turned up in Playboy, Asimov's, SciFi.com, Fantasy & Science Fiction, Socialism and Democracy, Southern Exposure and Harper's. A first collection, BEARS DISCOVER FIRE, was published by Tor in the fall of 1993. IN THE UPPER ROOM was published by Tor in May, 2000, includes the Locus and Nebula award winning "macs," which also received France's Gran Prix de l'Imaginaire. In 2005 San Francisco's TACHYON published a new collection, GREETINGS. PS of England is publishing BILLY’S BOOK in 2009.

Hi! Thanks for agreeing to do the interview. First off, what are the projects you're currently working on?
Too many! Some screenplays, a novel, a author's reading series (SFinSF) that I host, and a new line of short fiction for PM, a small anarchist press in Oakland. The problem with being a free-lancer is that you can't turn anything down; not that i would have turned any of these projects down. The most interesting, to me at the moment, is a screenplay adaptation of "Necronauts," my first Playboy story. It's to be produced by Komodo Films (Jakarta) in 3-D.
For me, you're the writer's writer in the sense that you have a long (and still going strong) career and written everything from short stories to novelizations to comics. What particular field are you most comfortable with? How about the field which is the most challenging for you?

Most challenging to me is and always has been the novel, because I work short, maybe because I'm lazy. I think most novels are too long, even my own, which are too short. I like writing screenplays but they almost never get produced, and rarely read, so it's like whistling down a well. I am most comfortable with the short story.
How did you get your start as a writer?

How does one answer that question? I won honorable mention in a Story Magazine contest when I was still in college. I wrote imitative Beat poetry in high school. In seventh grade a teacher had me read a poem out loud to the class, sort of a Lovecraft pastiche: the kids were not impressed, but the teacher was, and so was I! My first actual sale was to a comic mag, Warren's Creepy. I think you get your start as a writer over and over, maybe even every day.
What impressed me the most with your writing is your ear for dialogue. What made you decide to focus on dialogue for some of your stories and how did you nurture this skill (or was it natural)?

Just seemed to come naturally. I think I like dialogue because in it the writer (as narrator) is most absent, and characters reveal themselves most directly and unconsciously.
Do you consider yourself more of a science fiction writer or a fantasy writer, or both?

Neither. Both. All of the above.
What was the biggest hurdle you had to face in becoming a professional author? How about challenges you face today?

I had no hurdles at all. I was working in publishing (NY) and offered a job writing a Moorcock knock-off. Few writers get such an easy entrance into the field. After two novels, I was asked to submit a short story to Omni. I get rejected these days, but in the beginning, never! Go figure.
How did you become so prolific? Is there a "you must hire Terry Bisson" memo that I missed?

I am actually far from prolific. I have written in lots of forms because I have not been that successful in any one of them. The one I prefer is short fiction.
As an author who's written various media tie-in novels, what's your opinion on the subject? Does it simply pay the bills, is it something you really enjoy doing, it varies on the project, etc.?

I have done only a few (Star Wars, Nascar, Johnny Quest) and they were mostly a pain and not successful. I think to write a good Star Wars novel you have to actually like Star Wars, and that leaves me out.
What are some of the challenges in writing movie novelizations?

There are none whatsoever. It's painting by numbers.
Let's talk about comics. What are some of the comic titles that sparked your interest back then? How about now?

I was never interested in superhero comics or their later incarnation, the Moore/Gaiman type of stuff. The comics that lit me up were the old EC or Warren style, short stories. I edited such a comic mag back in the 60s, Web of Horror, which was one of the first to publish Berni Wrightson, Mike Kaluta and Ralph Reese. They have long outlived the format. I adapted Zelazny's Amber novels for DC--now that was fun! I also did Jane Austen and Shakespeare for Classics Illustrated.
What are some of the challenges in adapting an existing prose work to the comics format?

It's just like a movie. You visualize the scenes, you storyboard. With Zelazny or Austen it's a piece of cake; they have already done the work.
What made you decide to start Jacobin Books in 1985?

I was deeply involved in the radical New Left. My wife and I had lots of friends in prison. In 1985 I met Kassahun Checole, an Eritrean publisher, who also distributed English language books throughout Africa--Tanzania, Zimbabwe, South African etc. At a Third World book fair in London we discovered revolutionary/progressive books from Ireland and the Caribbean. If I had been more adventurous I might have discovered and included English language "left" books from the Phillipines. We put out a catalog and made the books available by mail to U.S. prisoners. It would be harder to do today: prisons are tighter and prisoners have even less money.
What lessons did you learn from that experience?

How to keep records; it was actually a business.
How did you first get involved with SF in SF?

In New York I had been part of two reading series at KGB, a downtown literary bar. Mark Jacobson, a brilliant "gonzo" journalist (Village Voice etc), and I hosted a Non-Fiction series with columnists and journalists, including stars like Breslin, Remnick, Schulberg, etc. Alice Turner, my Playboy editor, and I started a "fantastic fiction" series matching up literary writers with SF types. Jonathan Lethem and Brett Easton Ellis, Lucius Shepard and Joyce Carol Oates, Rachel Pollack and Michael Cunningham. (Alice knew everybody!) Then Ellen Datlow and I continued it as straight SF. It's still going on at KGB today. When I moved to the West Coast in 2002, SF reader Karen Williams suggested we try KGB here. After a few fits and starts, SFinSF settled in at the Variety theatre in San Francisco, sponsored by Tachyon books, and is going great guns.
What are some of the challenges you face in hosting SF in SF?

There are none whatsoever.
In your opinion, how has science fiction changed over the past few decades?

It has become a baggy pair of pants.
How about the publishing industry in general?

It has become more of a business, to the general detriment of writers, Biz and Lit are a poor fit, since Lit exists mostly in the past, somewhat in the future, and Biz is primarily a way of mining the present.
As someone with your experience, what advice do you have for aspiring writers?

Go away. There are enough writers already. Wait for some of us to die.
Posted by Charles at 4:31 AM