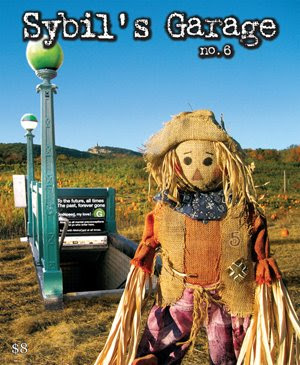 One of writer Damien G. Walter's challenges is that "We need more beautiful magazines" and Sybil's Garage No. 6 easily fits that bill. While not as experimental as McSweeney's, editor Matthew Kressel does a lot of outstanding things with this issue. Aside from the well-designed layout, each story/poem is preceded by a recommended song and this presentation is consistent. There's also what seems like random scribblings by an enigmatic writer at the end of various texts but it all culminates into one meta-narrative that this reviewer found tear-jerking, even if it's just a simple plot and conceit.

On the nonfiction side, this issue features an interview with Paul G. Tremblay on his novel The Little Sleep conducted by Devin Poore. The feature is focused on Tremblay's book and while it's not a speculative fiction title, Poore manages to steer the conversation to a topic that's relevant to genre as well as providing an insightful read.

When it comes to the fiction and the poetry, Sybil's Garage No. 6 is actually quite meaty in the sense that it manages to include a total of 29 stories and poems. I wouldn't identify most of them as particularly memorable, but even in their mediocrity they provide something different from the norm, and there's a distinct flavor and character to the selections. Having said that, here are my top three picks:

"Elan Vital" by K. Tempest Bradford manages to cram a lot in this relatively short piece. While the science fiction aspects and ramifications might appeal to genre readers, what drew me to this story is how Bradford attaches a human component to the narrative and everything else grows out of that. Her protagonist is not only sympathetic but her unique situation could only have been pulled off in the medium of prose. For example, if this were a comic or a TV episode, part of the tension would have been tipped off too early, and a pivotal scene would have lost much of its momentum. But as it is, the chronology is just right, and Bradford crafts a story with emotional resonance.

"Metamorphic Megafauna" by Susannah Mandel is a fun and interactive poem. Much of its charm for me is the central idea it's attempting to convey, and this is probably one of those poems where it'll polarize readers.

"Fulgurite" by Vylar Kaftan is easily my favorite story in the bunch and showcases the strengths of the genre. Much like many of the stories in this issue, one of the strong points is how the author anchors the narrative with character. The plot is fairly simple and follows the typical coming-of-age formula but what makes it stand out is Kaftan's language, at how she employs apt and consistent metaphors. While it's a modern story in terms of setting, it also conjures a fantastical atmosphere which heightens the narrative.

Sybil's Garage No. 6 for me is the genre equivalent to alternative music: it goes against the norm and has a distinct but not so quantifiable personality. In terms of aesthetics, this issue is praise-worthy, and in many ways, it's the sum of its parts rather than the individual stories/poems that makes the magazine stand out.
Posted by Charles at 5:53 AM