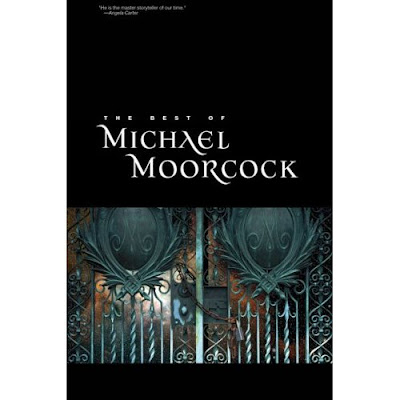 Publishing a "best of" collection for an author as prolific and respected as Michael Moorcock provides an interesting dilemma, especially when you're limited to a page count of under 150,000 words. The short stories of Elric alone could easily fill several omnibuses. Another factor is Moorcock's long career. Aside from the fact that many of his short stories have gone out of print (to the point that they could easily be new fiction by the time you read them in this collection), his writing spans half a century and an editor will struggle to decide which decade of Moorcock's fiction to specialize on.

Miraculously, John Davey manages to select short stories which best represents Michael Moorcock, and by that, I mean Michael Moorcock as an author, instead of simply Michael Moorcock the genre writer. Side by side with "Behold the Man" we have three stories from My Experiences in the Third World War and "The Opium General." When one mentions the name Moorcock, the first thing that springs to mind is Elric and the various sword & sorcery tales (in fact an anti-Conan the Barbarian) of the author but this collection dispels that notion. The editors dig deeper and showcase not just Moorcock's genre side but his literary side as well (and in some cases, the line where both are blurred). A lot of the included fiction feature well-crafted stories that are rich in detail and character, admittedly narratives that don't always have strong openings but pack a punch by the time you're done with them. What's surprising is that while some of his writings are dated, they're still accessible and relevant to the modern reader, at the same time showcasing a variety of technique and skill. "The Deep Fix" for example was cutting edge for its time but is nonetheless a layered and complex read for today's audience. "A Slow Saturday Night at the Surrealist Sporting Club" on the other hand is Moorcock's attempt at humor, while "The Cairene Purse" is serious and detailed while containing science fiction elements.

By the time you read the Afterword, the selection makes sense and the editors clarify what they didn't include--in this case Elric and Jerry Cornelius stories (although each one has a short piece at the beginning)--along with the realization that "This writer, without the aid of those two robust companions, would still have had an amazing career." At the very least, this collection proves that. The sequencing of the stories is also another element in this book and rather than opting for a table of contents that follows the author's publishing history, there's something quite Moorcockian in the seemingly-arbitrary mix.

While most of my review has focused on the content, what needs to be commented on is the design of the collection. It's stylish and elegant and is one of the best layouts I've seen as far as short story collection goes--all without the aid of illustrations.

I am, admittedly, not a big Michael Moorcock fan but The Best of Michael Moorcock is a great introduction to this author's body of work, whether you're reading him for the first time or the nth time. The book takes a big risk by showcasing the author's best work instead of his famous ones, but it's these kinds of risks that makes such a collection stand out, instead of simply being a rehash of the author's many reprints (which, I might add, inevitably go out of print). If you're interested in getting a glimpse of a more holistic view of the author, this is the collection to get. I'm sure Stormbringer won't mind.
Posted by Charles at 6:05 AM