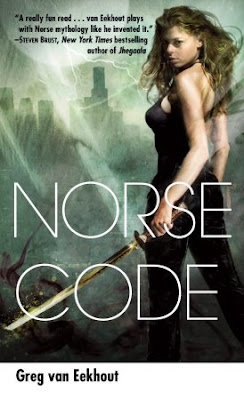 The title of this novel honestly sounds like a gimmicky pun but thankfully Greg van Eekhout makes the Norse mythology element work in addition to providing readers with a compelling read. At first glance--especially due to the book cover--Norse Code appears to be another of those urban fantasy novels, with secret organizations, a kick-ass female protagonist, and supernatural antagonists. While this novel has those elements, Norse Code honestly feels more like a fantasy epic as the characters spend a bulk of their time encountering mythological creatures on their own turf rather than exploring conspiracies and fighting in an actual urban setting.

This book is a page turner and what's interesting is that Eekhout doesn't accomplish this by ending each chapter via cliffhanger, but rather through the upbeat pace and relevance of each scene. In many ways, this is where several of Eekhout's flaws come in: lack of a detailed setting, minor and secondary characters don't get fleshed out, not enough quirky dialogue, and absence of flowery prose. But all those omissions are in the service of the story and Eekhout manages to focus on writing a condensed, action-packed novel.

Other strengths of Eekhout is that his main characters are sympathetic and tempered by both bravery and hesitation. While the author is drawing from Norse mythology (and expected deities and monsters make an appearance), Eekhout focuses on the less popular deities, and actually making them interesting to read. Forget about Thor or Odin, it's minor gods for the win!

For the most part, Norse Code accomplishes what it sets out to do. Is it a perfect novel? Not by any stretch, but it was an entertaining read on a Sunday night when you just want to relax and watch some fireworks (or Ragnarok, as the case may be).
Posted by Charles at 5:47 AM