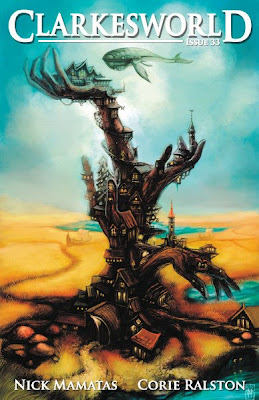 This month's Clarkesworld features a pair of light-hearted stories and some meaty non-fiction. First off is the cover art, "Handbark Academy" by Alexander Nanitchkov. This is one of those pieces where the details matter, especially the way the thumbs merge with the structure. The artist uses an interesting mix of colors, neither hopeful nor dystopic, but rather conjuring an atmosphere of strangeness combined with a touch of gloominess. I like how the sky isn't shiny or bright, but mostly covered by clouds, befitting the apparent setting. It's not immediately striking, although closer observation makes one appreciate the work.

The feature story is "Walking with a Ghost" by Nick Mamatas. On the surface level, it's an accessible, upbeat story with characters who actually have personality. Melanie's I-won't-take-crap comes across through dialogue, her banter with Chakravarty is engaging (and competently used to convey exposition), and the Lovecraft fan is annoying. Another virtue of the story is the telling details, especially when Melanie starts her investigation. On the meta-textual level, Mamatas plays with a lot of concepts. First there's the title and the ghost in the story is certainly a modern interpretation of what it means to be one. Second is how the author touches upon artificial intelligence without making it the entire point of the story. There's also the inclusion of Lovecraft, how we typically associate him with horror, and how this story subverts that expectation.

On its own, "Walking with a Ghost," is enjoyable and Mamatas uses a couple of techniques effectively. Lovecraft fans will appreciate the allusion but it's no means necessary to enjoy the piece. My problem with it is ultimately that of expectation--or transition--as what I was hoping for was this big, dramatic conflict at the end but instead it delivers a story that's comedic and modest.

The podcast is read by Kate Baker and as always, she does a great job with the reading. Her English is fluent and what really caught my ear was the way Baker distinguishes the various characters, whether artificially (the AI voice) or through changing her pitch and tone. This isn't necessarily a bad thing but the past few Clarkesworld podcast seems to be drifting in the audio drama territory, especially with the inclusion of background music and sound effects.

I'm conflicted when it comes to "The Giving Heart" by Corie Ralston. Right from the start, the tone already conveys the mood of the piece. There's a tendency by some writers to make their protagonists bibliophiles--a technique that's either a cheap method to endear them to the reader, or a masturbatory indulgence at worst--but that's not the case here as Ralston does make the character's obsession with books integral to the story. There are some scenes which I wouldn't classify as genuinely funny but fits the ridiculousness of the situation. My biggest complaint is the ending. I can't say that it's not seeded, but the way we got there lacks build-up.

This issue's non-fiction are quite heavy-hitters. Most relevant to writers is "The Story Is All: Ten Fiction Editors Talk Shop" by Jeremy L. C. Jones as the author asks various editors what they look for in a story and how it fits their publication. Thankfully, the editors give varied answers, and what seems like a monotonous set of questions actually leads to interesting discourse.

Dr. Kari Maund has a lengthy and well-researched article on "Who Were the Celts?" and not only tackles the origins of the term but dispels a misconception we have about them. Nothing flamboyant in terms of language as Maund takes a direct but concise approach. I found the article informative although the length was intimidating.

"Short Fiction: One Year Later" by Neil Clarke discusses the genre fiction magazines, from providing stats to print publication's subscribers to news of ventures that have closed and started anew. If you've been living under a rock for the past few years, this article summarizes the state of genre short fiction and might even include a factoid or two you didn't know.

Clarkesworld non-fiction doesn't cease to disappoint, although this issue seems to focus more on the industry-side of things. The paired light-hearted fiction is an interesting approach but for me doesn't work as I tend to look for more weight and gravity in my stories, especially if it's just limited to two stories a month.
Posted by Charles at 7:01 AM