Book/Magazine Review: We Think, Therefore We Are edited by Peter Crowther 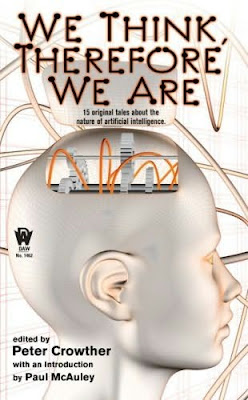 We Think, Therefore We Are is an anthology on artificial intelligence. A good chunk of the stories cover the typical interpretation of the term (i.e. robots), while others stretch the definition of the concept. Personally, it's interesting to see homages to Asimov's Three Laws of Robotics (which was the case in "The Highway Code" by Brian Stableford and "Dragon King of the Eastern Sea" by Chris Roberson) but for the most part, this was a ho-hum book that contains a lot of competently written stories sprinkled with the occasional stand-out piece.

We Think, Therefore We Are opens with a brief but insightful history on artificial intelligence from Paul McAuley. It's a bit outdated--a lot of innovations actually occurred in between the time of the introduction's writing and the actual publication date--but it's a good primer on the subject matter.

When it comes to the fiction selection, I felt most of them were mediocre. There's nothing wrong with their writing, mind you, but they fail to make a strong impression, the type that might challenge its way into a "best of" collection. Which doesn't make this a bad book, but it does impede it from being a priority in anyone's reading list. Still, there are exceptions to the rule, and here are some noteworthy stories:

"The Kamikaze Code" by James Lovegrove is honestly a guilty pleasure as it starts with a plight that fiction writers are aware of. This is actually one of those concept stories with a unified premise and of all the stories in this anthology, I can easily imagine this fitting another theme. Having said that, what makes "The Kamikaze Code" an interesting read for the more common reader is Lovegrove's tone and pace as he delivers a quick narrative using broad-strokes characterization and humor. Admittedly, I found the resolution to be unnecessary (a bit too complex than it needs to be) if you think too much about it but hey, it was a fun read.

"The New Cyberiad" by Paul Di Filippo is a lengthy but funny read as the author includes hijinx of all sorts. On the surface level, it meets the criteria of the anthology as its two main protagonists are robots. The dynamic between the main characters are enjoyable in the Perfect Strangers sort of way and for most readers, that's enough. If you dig deeper though, Di Filippo is quite clever as he references a lot of SF tropes and subverts (i.e. make fun of) them.

"Sweats" by Keith Brooke is one of those stories that immediately strike me as a story appealing to the core SF crowd, the ones looking for a plotty and conceptual story. If that's what you're looking for, "Sweats" delivers and this is the type of fiction that takes the anthology's theme to the next level. The narrative carries with it a certain bravado appropriate for its atmosphere and thankfully veers away from the direction I thought it was headed (the story starts out like a reject from the Stephen Baldwin movie Xchange).

Overall We Think, Therefore We Are isn't bad, and to its credit, has its fair share of gems.
Posted by Charles at 6:52 AM