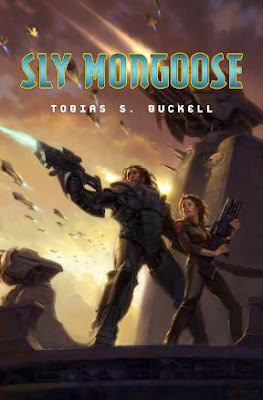 Tobias Buckell is a professional science fiction author and blogger. His most recent novels include Sly Mongoose and Halo: The Cole Protocol.

Hi! Thanks for agreeing to do the interview. First off, when did you first fall in love with science fiction?

I was pretty young, six or seven, I think, when I picked up Childhood's End by Arthur C. Clarke. Blew my mind apart. I wanted more of the big concepts of SF after that.

The cyberpunk writers had a big impact on getting me writing when I was in high school (particularly Islands in the Net by Bruce Sterling, and his Schismatrix series), though Vernor Vinge's A Fire Upon the Deep was one of my all time favorite novels. I read and reread it over 30 times, and I even paid my sister to count all the pages per chapter created an estimate of how many words per page and chapter there were, and then created a plot diagram out of it.

Other than that, I read everything Arthur C. Clarke wrote. When you say Science Fiction to me, I think Clarke. His characters came from a global community, and it looked out at the larger picture with a sense of wonder for the whole human race that was so inclusive and forward looking, with an emphasis on the need for rationality and science, that he affected me more than any other writer.

Did you always know you wanted to be a science fiction writer? Do you plan to branch out into other genres or perhaps even mediums (such as comics or video games)?

I always wanted to be a writer, yeah. Other genres don't interest me as much, but I'd love to play in other mediums, yes. Videogames interest the heck out of me, but right now I'm also really interested in writing scripts. With special effects getting cheaper and cheaper, I think the time of fantastic genre movies is just around the corner, but I think a new generation of script writers who can play with scripts that take advantage of the 10-20 million dollar budget area, small films, will be in high demand in the decades to come.

You've participated in workshops, won contests, and simply churned out stories. In your opinion, what was one of the most valuable writing lessons you learned and where did you learn it?

That it's hard work, on the level of making a living at it, you need to write a lot of pages every day to hit that novel every year, or 18 months, plus all the other stuff that comes along with the career (short stories, articles, non-fiction if you're me). The sooner you can figure out how you can get up to speed the better LOL. I talked to a class the other day about how, during the winter, because I have seasonal affective disorder, I slow way down in my output. Last winter, I said I'd written 4 or 5 short stories, a novel proposal, and that's on top of my daily non-fiction work. They were shocked at the work load, but I'd worked my way up there after 2 years, their one short story a month did not impress me at all LOL.

Let's talk about your novels. When you first wrote Crystal Rain, did you already intend for it to spawn off into other similar novels such as Ragamuffin and Sly Mongoose? Will we be seeing other novels set in the same setting in the future?

Crystal Rain was a stand alone novel, but I had written some short stories and outlined some ideas about the larger context of the book from years before. However, lots of details changed when I sat down to write Ragamuffin, as that was the book where I did open the lid and peer into all that background and solidify it.

As for whether we'll see more novels in the setting, at this point it depends on sales of Sly Mongoose...

I enjoyed the characters and the various political philosophies in Sly Mongoose. Do you have a hierarchy of priorities when writing novels, such as character trumps plot or vice versa?

I view it as a very large organic bubble chart, to be honest. Each one influences the other, overlaps, it's all messy in my head. In the end, though, I seem to naturally be more of a pacing/plot person, but that usually means I work extra hard on characters to compensate.

Your fiction has often been described as Caribbean. Do you agree with this sentiment? What in your opinion are the elements that identifies a text as having a Caribbean influence?

I'd like to think there is a diversity among my characters and world that is not the usual, and that comes from my growing up in the islands, where people from all over the world gathered together on islands. My interest in smaller developing countries, and how smaller groups stand up against larger ones, comes from it. I have a post colonial power struggle thread through the works.

That's some of the socio-stuff. There is also, growing up in the developing world, a fascination with mashups: taking technology and remixing it in new ways. That includes language (some rastafarian remixing of language, take a word like oppressor to downpressor) and music as well (dub reggae, using old oildrums to make steelpans). There is my love of the sea and sail, that comes from growing up there.

I have a very gray view of political stability that comes from growing up in Grenada, with its history and hearing how things went from hopeful, to scary, and then crazy in a revolution and war.

All of these things blend in.

In a SFF World interview, you've mentioned your preference for writing novel-length fiction. Does that mean you're more comfortable writing novels than short fiction? As far as your writing is concerned, what's the biggest adjustments you have to make when preparing to write short stories as opposed to novels and vice versa?

I prefer novels to short fiction, I'm more comfortable with the novels, yes. The adjustments are that with that novels, however, you have to run a marathon. It's months and months and months of staying focused on writing the book, and not getting discouraged and fed up with your own inadequacies and the flaws you see in the work. The ability to push through takes mettle.

What kind of research did you have to do for your Halo novel?

I'd played the games, so that was research. When I got the contract to write the novel, I replayed Halo 2 and Halo 3, just to get fresh. It was funny that my wife would come out in to the living room and ask why I was playing so much Halo, and I'd say 'just working, sweetie. Working hard.' I also read the previous 5 novels, the graphic novel, and the comics that had come out. The folks at Bungie also had some material for me to read that helped background it all. So all in all, it was fun research.

In Of Blog of the Fallen, you mentioned you'd love to do an X-Men novel. What other licensed properties, given the chance, would you like to write?

Well, a Wolverine novel, to be particular ;-) I'm a big fan of the Terminator reboot on TV, the Sarah Conner chronicles, particularly season 1. I'm fond of the Gears of War videogame, as well as Mass Effect.

What are some of your favorite games or hobbies you do to relax?

I play a lot of Xbox :-) I'm looking forward to the next Call of Duty and Mirror's Edge, I'm playing Brother's In Arms: Hell's Highway, right now.

How has the Internet affected the SF&F industry?

I think it's drawn the writers and readers closer together. There's quite an online community.

What's the biggest challenge you've faced as far as the industry is concerned, whether it's starting out as a new author or perhaps promoting yourself?

I find the shelf life for books to be absolutely brutal. Despite all the push for online promotion and sales, if the book doesn't get shelved in bookstores you lose a lot of traction. Hardcovers get 2-3 months on the shelves. When my first book came out in hardcover, after years of working toward being published, seeing the book all but disappear after a couple months was really hard on the new author psyche. The industry is very focused on the 'next big thing.' On your first book, there's no upper limit, so you have some attention and excitement. Then the industry runs off to the next first book. The hardest book to sell is the fourth, I'm told increasingly. I've managed that, so I feel lucky. I have 2 more in the pipe.

What happens after that, we'll see!

If your character Pepper were to participate in an intergalactic battle royale, who are some fictional characters you'd think would make good contenders for him to face off?

I'd pay to see Pepper versus Wolverine.