Book/Magazine Review: The Beyond by Jeffrey Ford 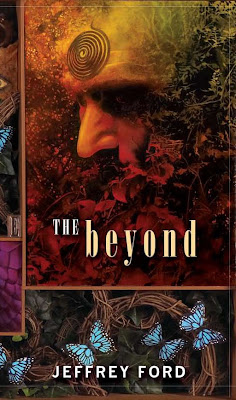 The Beyond is a bigger departure from the previous novels of the Well-Built City trilogy, especially when compared to Physiognomy. Clearly the author was attempting different styles and approaches to the books. In this novel, we have a juxtaposition between two points of view, one of which follows a flow that is best described as fractured time. It's the latter that I have a complaint with as at times, it can be dragging. However, it also captures the frustration of the character and the monotony of his exploration. On the positive side, we have tender moments such as that of a man and his dog, perhaps more successful than Richard Matheson's I Am Legend.

The other point of view, which significantly shorter, was what I found compelling and serves as an excellent backdrop for the other elements in the book. As usual, Fords uses his sleight of hand and we're not really sure whether the events that transpired actually did happen. It is this duality in the series that has remained consistent, more so in this novel than in the previous ones.

The conclusion is to be lauded and this is where The Beyond truly shines. Ford leaves enough hints for the readers to decide, empowering them through his masterful craft of storytelling. Those who followed the series so far will definitely be surprised by the styles that the author explores but it can be rewarding especially if you're tired of formula. Fans of Ford also witness his slow evolution and much like the other novels in the Well-Built City trilogy, one can spot the seeds of his future short stories and novels. Not by any means a polished Ford but The Beyond is well worth the read.
Posted by Charles at 5:26 AM