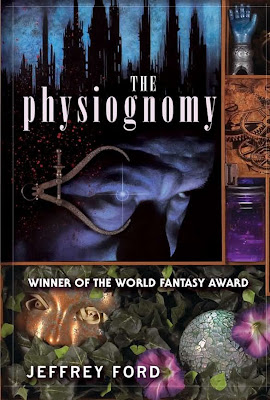 The Physiognomy isn't one of those thick, epic fantasy novels yet there is something massive about the book. Perhaps what anchors the reader is the way Jeffrey Ford uses one central character to narrate his story. Cley is a physiognomist and that premise in itself tells us so much about the world and the cosmology. The author definitely mines the concept of "what if a person's personality can be determined by their facial features?" and a lesser writer would simply stop there and perhaps compose a short story or even a novelette. Ford however probes deeply into this belief and expands upon it like an ambitious science fiction novel: what kind of society gives rise to a science like physiognomy?

While the high concept might intimidate readers, nothing can be further from the reality. Again, Ford grounds his narrative on character and it's easy to catch up on the action and events that take place. There's a lot of Steampunk-ish elements in the book, from clockwork jailers to token-powered babies that appear fresh and lend it an atmosphere of the New Weird. But beyond this spectacle and eyecandy there's a compelling narrative behind it and The Physiognomy is definitely Cley's personal story.

My complaints with the book is that it's not as tight as it could be (although the succeeding Ford novels show that he's improved). The first half of the book has an upbeat pace while there's a definite halt to the action somewhere in the middle. The menagerie of weird creatures doesn't cease however and Ford continues to fascinate us with fabricated horrors.

For me, rereading this book was interesting because in many ways, it's territory Ford doesn't cover much as of late. This is his version of an epic fantasy, one filled with adventure and discovery. His more recent novels save for The Girl in the Glass have a more literary bent with a definite slower place and a focus on language. The Physiognomy is where Ford is an unabashed fan of exploration and action while retaining his own unique style.
Posted by Charles at 5:20 AM