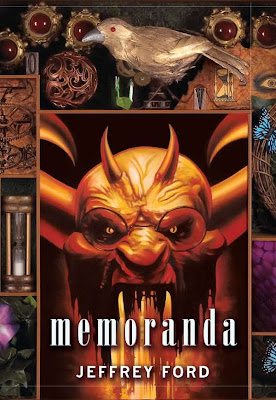 This isn't the first time that I read Memoranda and yet rereading it is suitably apt as you can surmise from the title, a recurring theme in the novel deals with memory. This is the second book in the Well-Built City trilogy of Jeffrey Ford and having read the previous novel adds layers in one's understanding of the events but by no means is it a requirement. In fact, my first reading of Memoranda was months after I had read The Physiognomy and I did miss out on some of those details. Did it affect the overall narrative? Not really but such details reveal the author's care and preciseness.

Most of Memoranda has a duality to it that makes it complex and layered. Claiming that this is The Empire Strikes Back of the trilogy is an all-too easy simplification. Ford in this novel aims for something less straightforward than The Physiognomy but at the same time, it still has that frontier adventure atmosphere. Our protagonist is still out on a journey, attempting to solve the problems he comes across. There's less of a steampunk atmosphere here and more of the bizarre as our hero enters the dreamscape of his nemesis. Astute Ford fans will notice how the author will mine some of the ideas he develops here in the future. For example, there's a brief parallel foray into Reparata, the setting of one of Ford's short stories. Fans of Ford's The Portrait of Mrs. Charbuque might also imagine this is the sandbox where the author hones his craft at magic realism.

For the most part, the book relies on sympathizing with the main character although I'm not absolutely invested in him. Perhaps it's due to those moments of self-pity that tend to drag a bit too long, especially towards the latter part. Still, this was a fascinating and enjoyable read, and the book seems to be the melting pot for adventure fantasy and surrealism. Again, memory seems a suitable subject for such a topic and Memoranda is quite ambitious in that sense. The book still has some rough edges but nonetheless a good book.
Posted by Charles at 5:24 AM