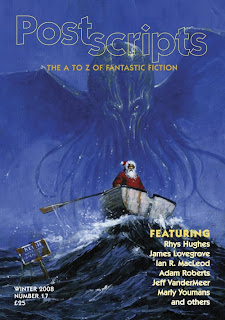 A good chunk of the stories in this issue of Postscripts were surprisingly... light. Now I don't mean that as a euphemism for horrible reading. In fact, they were quite enjoyable and well-written. No, what I mean by light is that with each issue of Postscripts, I expect to to be skewered, disemboweled, and occasionally lobotomized. Instead, I was entertained by Jeff Vandermeer's "Why the Vulture is Bald", laughed at Rhys Hughes's "The Gala of Implausible Songs", and found Douglas Smith's "Doorways" to be predictable but fun. Now I don't know whether this is because majority of the contributors conspired to submit something that's a definite change of pace ("we don't want to give our readers a heart attack over Christmas as the doctors will be off-duty) or because this is the holiday issue but it certainly was a surprise.

That's not to say this issue was devoid of "serious" stories. Around half were going for the jugular instead of the funny bone. Having said that, I'm sure you wouldn't be surprised by my biased highlights. "The Camping Wainwrights" by Ian R. Macleod actually would have been more effective you don't read the author's pre-story notes but it's nonetheless one of the most striking pieces in the magazine. The author wins us over through the tried and tested skill of characterization and details that add verisimilitude to the story. Macleod prepares the reader for the inevitable knock-out punch at the same time throwing a jab or two when you least expect it.

"Enquete Incisive" by Tara Kolden was compelling all throughout and very much mesmerizes the reader into the mystery. We have, after all, an investigator with a distinct personality and his encounters with the various characters sound convincing and not forced. The story was easy to get into and simply put, Kolden leaves enough clues for the readers to enjoy the puzzle.

Occasionally, one picks a story because it's a guilty pleasure and "The Plot" by Justin Cartaginese is such a piece. This is comedic meta-fiction (or post-modern if you prefer) and much of it is carried through dialogue. I'll give it props for being quirky as it appeals to my writer sensibilities.

Aside from those assessments, Postscripts #17 was a respectable issue. I appreciated all the stories, not a bad one in this set, although as I mentioned before, around half the stories aren't heavy-weights but rather selections that fit the festive mood. Definitely more Santa Claus than Cthulhu.
Posted by Charles at 6:22 AM