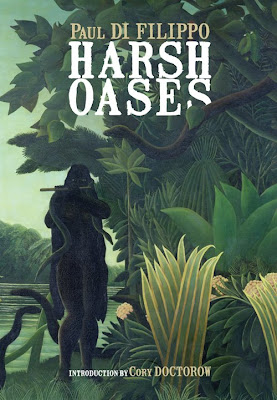 I'll get right to the point. Harsh Oases is like opening your vein to a direct shot of some psychedelic drug that takes you to exotic vistas. Paul Di Filippo's strength is his flexibility and this becomes evident when you read the array of stories spanning more than a decade of his writing career. From cyberpunk to comedy, the author has it pat down. Cory Doctorow in the introduction states that Di Filippo manages to channel various authors in his writing and I'm unfamiliar with a good bulk of them but that shouldn't matter. This seems to be a well-rounded collection that's easily a good gateway for those who've never encountered the author.

Long time Di Filippo fans will want to check out "Aurorae" and "A Game of Go", both of which were previously unpublished. These stories are a double-edged sword as Di Filippo dates himself with his details but this also heightens and adds verisimilitude to the pieces.

The titular piece, "Harsh Oases", is definitely the break-out story in this collection. It's not only ambitious but manages to capture all of Di Filippo's core strengths from characterization to fun science. This is best described as a miniature science fiction epic and succeeds in living up to that expectation.

I praised "Femaville 29" when I first read it in Salon Fantastique and it's equally a heavy-weight in this collection. Re-reading it, what struck me the most is how the author balances both bleakness and optimism all throughout, hanging in there until the very last line. Aside from that, it's a very verbose piece filled with comprehensive details and fleshed-out personalities.

There's no bad story in this collection and a good chunk of the stories are good for a few laughs. A definite must-read for 2009.
Posted by Charles at 5:07 AM