They Came from the Trenches! 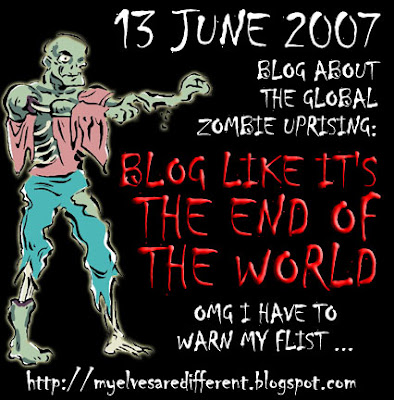 Last week, I've been using this night light that attracts insects and kills them. Every so often, I'll hear this sudden zap that kills one of them damn flies. Unfortunately, this also has a tendency to suddenly jolt me awake.

Which is a good thing too because last night, it was what saved me from the zombies!

For the past few weeks, the water company has been doing some construction around our area, usually taking up space in the roads as they install new "pipes". Well apparently, they weren't installing pipes to transport water. They were installing pipes for the zombies to attack us! Since the construction was spread out, from the school to the restaurants outside the village to Camp Crame, this also meant that the zombies had instant access to key locations. In one swift moment, they just all suddenly appeared!

Most of the houses in the village had tall gates. These would have bought the owners some time as it took half a minute for the zombies to climb over them. Unfortunately, they struck at midnight when everyone was asleep. Some of the dogs were barking but who knew it was the start of the zombie attack? The dogs were quickly silenced.

Personally, I went down to the kitchen for a glass of water when I saw the zombies banging on the windows. And then breaking through. They came from every direction but luckily, I used my nimble size to escape. It's a good thing I walk to work too... running that fast didn't put too much strain on my body.

It was when I was outside that I saw where the zombies were emerging from. The pipeline acted as trenches for the zombies, their main route around the city. Occasionally, someone would put up a fight against the zombie. They'd be dragged into the pipes however and then all I heard was lots of screaming.

Anyway it's over now. The zombies just fled when the sun came out. But the damage has been done and the sewer trenches are still there. They can pop up anytime. Maybe if I can find a construction vehicle and have them apply cement over the pipe system...

To my readers out there, don't let them install pipes outside your homes! You've had water all this time before those pipes, installing them won't make your life better! It's part of the zombie conspiracy!
Posted by Charles at 5:21 AM

Email ThisBlogThis!Share to TwitterShare to FacebookShare to Pinterest
Labels: zombies

Zombies? Here in California, we get a lot of homeless people and migrant workers. Are you sure it wasn't people like that?

Dammnit, forgot to sign up for this one. Oh well...

Our homeless people aren't quite homeless. They usually construct their own houses. And we don't really have migrant workers. We're the ones sending them out elsewhere. =)

Banzai: I plugged it around three times. I was wondering where you went...