Freeing Up Some Space

More than a month ago, I found a nearby shop that was disposing of its old AD&D stock. Books were going for around $1.20 (it's amazing how the peso appreciates in the span of one month) and here's a picture to give you a visual image of much of the stuff was there: 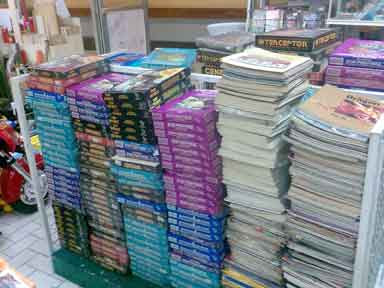 Anyway, long story short, found three interested parties at EnWorld who wanted some of the stuff, and one guy who wanted everything. As cheaply as they were selling the stuff, I don't have the money (or the actual strength to carry them) to purchase everything. So I settled for the three parties who wanted the books and brought nearly a hundred modules home.

Anyway, two of the interested parties finally got their books. I'm still waiting word from the third. It's just a relief though to get the books out of the room. These were modules that were more than a decade old. And while shrink wraps protects the modules from getting dirty, it doesn't prevent dust clinging to my room.

Oh, and carrying books that's half my body weight (me being underweight doesn't help) isn't good for the body, even if they're just paper.
Posted by Charles at 8:58 PM

Is that still going on? I'm tempted to pop over there this weekend and see what I can get.

Alas, somebody did buy up the entire stock. It was a foreigner though, so probably someone who saw my thread at Enworld and thought they could make a killing in Ebay.

The paperbacks are still there. No one wants them. =) There's probably some Thieves World or two there.