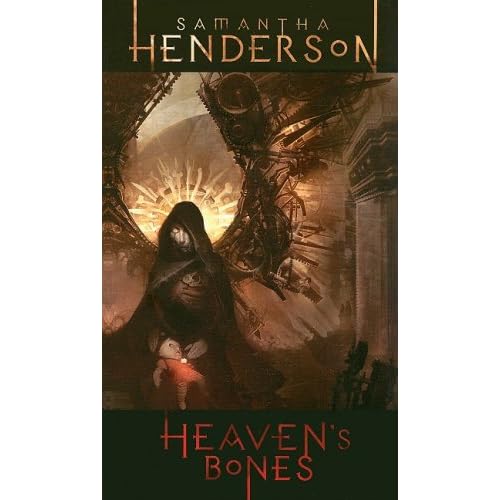 I have mixed feelings when it comes to Heaven's Bones, the latest novel by Samantha Henderson. On one hand, this is a good example of how a game media setting--Ravenloft--is appropriated for the horror/fantasy genre in general. This isn't a D&D novel but rather distills the best aspects of its horror line and transforms it into something that goes beyond its niche. What we end up is a horror/suspense story in the vein of Dracula or Frankenstein rather than I, Strahd or Knight of the Black Rose.

On the other hand, the execution is a mixed bag. Heaven's Bones feels like it still needs some polishing. The novel in my opinion would have benefited from more showing rather than telling, although Henderson does have some good scenes such as clockwork angels or the various medical surgeries. The author also juggles a large cast of characters and while some personalities were fleshed out, a few felt like plot devices, especially with their inclusion late in the book. Lax readers might also find the book a bit confusing because aside from the huge cast, there's some world and time jumping involved. Once one gets past the first half of the book though, everything starts to pick up in pace and action.

Overall this was a ho-hum read. Henderson definitely has her moments but it doesn't occur as often as I'd like. It's certainly a daring attempt on her part trying to balance all the characters in the story, including multiple points of view and varying timelines, but it's simply not as effective compared to other authors who've attempted to do the same thing. Horror fans however shouldn't be discouraged by the Ravenloft inclusion (and in fact the tie isn't really mentioned in the book or the back cover) while Ravenloft fans should be prepared to read something entirely different.
Posted by Charles at 4:32 AM