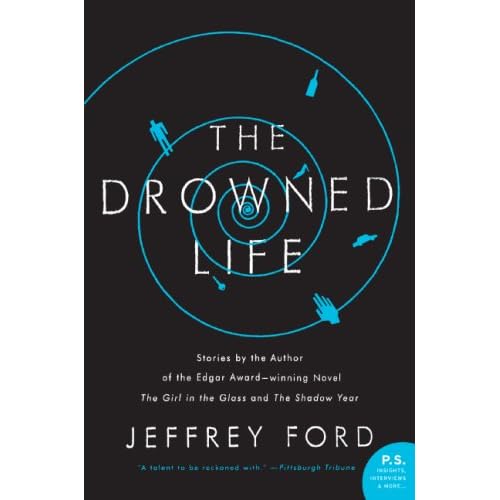 Jeffrey Ford's The Drowned Life is as engrossing as his previous short story collections, immediately ensnaring the reader with his detailed prose and characterization. One noticeable trend is that while Ford dabbles in clear-cut fantasy with stories such as "The Manticore Spell" or "The Dismantled Invention of Fate", much of his stories deal more with the mundane sprinkled with just the right amounts of magic and the surreal. The titular piece for example, "The Drowned Life", seems like the narrative of the common Joe albeit one that utilizes Ford's excellent use of language and metaphor. However, it slowly steers itself into the territory of weirdness with its concept of an underwater afterlife but all this time, the reader isn't jolted from the experience.

What I particularly enjoy with Ford's writing is that the quality is consistent. Each and every story is rich, whether it's the minutiae of the descriptions or the complexity of its protagonists. As a long time Ford fan, it's also more noticeable to me how some stories feature recurring characters, and if there's any cosmology that he's revisited time and time again, it's that of real life (a quick reading of the detailed biography at the end corroborates this, especially in light of the story "What's Sure to Come").

I'm pretty much overwhelmed by all the stories in this collection but here are my top three: "Present from the Past" is an emotional rollercoaster as the author fully fleshes out the personalities and experiences of the protagonist's relatives. For example, there is a definitive impact when Ford uses the word "bullshit" as a description of the father's mentality towards the complaints of the various characters. This is also one of those stories that end at just the right moment, the type that brims with potential rather than a failed attempt at attaining ambiguity.

"The Way He Does It" is an almost whimsical narrative as Ford constantly teases the reader with revealing what "It" actually is. That it captured my attention as a reader for the entire length is a testament to Ford's skill and this is one of those stories that's stronger because of the dialogue between the reader and the text rather than what the author explicitly includes.

"The Dreaming Wind" has been one of my favorites ever since I first read it in Coyote Road and still stands up to multiple re-readings thanks to Ford's usage of language, his manipulation of the expectations of both the characters and the reader, and his overall execution. It's not often that an entire town is an actual character yet that's the case here as the individual characters are merely parts of a bigger whole.

The extra material at the end is also invaluable, whether it's the longer-than-the-usual biography or an essay on "The Metaphysics of Fiction Writing". The Drowned Life is a very satisfying collection, easily one of the most memorable short story collections for the year.
Posted by Charles at 5:56 AM