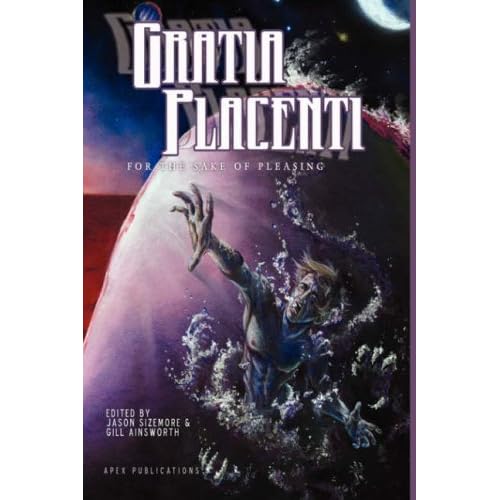 I didn't know what to expect with Gratia Placenti and it was a welcome treat despite being a short book at thirteen stories. Horror seemed to be the focus of this anthology and it featured various writers I was previously unaware of.

The first few stories impressed me as this seemed to be the kind of stories I was interested in reading with its development of character and atmosphere. What sold me however were the abilities of the authors to end their stories by implying something rather than directly stating it--making for a reading experience that goes beyond the shocking ending. Later in the anthology however, I also got the other kind of stories, the type that simply attempts to suddenly frighten its readers. That's not necessarily a bad thing and it certainly makes Gratia Placenti a mixed bag but I was really hoping for more of stories that went for the jugular.

Having said that, here are my top three favorites: "Follow the Canary" by Athena Workman dives right into the action and introduces to us this bizarre world and cast of characters. I enjoyed the weirdness of it all and Workman manages to create interesting characters to read. What I really like is the inevitability of the ending which feels natural by the time you reach that point.

Neil Ayres's "The Listening" is another powerful story and relies primarily on characterization and sympathizing with the protagonist. Ayres more than caught my attention and this is one of those stories were the details matter significantly. The ending has that perfect combination of ambiguity and horror/tragedy, depending on how one interprets it.

Last is Mary Robinette Kowal's "Tomorrow and Tomorrow" which is successful because of the atmosphere it sets up. I was lulled into complacency and them wham! Kowal delivers a one-two combination that caught me by surprise and still manages to be effective even if you realize what's coming. The climax is probably the selling point of this story (as opposed to the ending) but Kowal succeeds because of the way she fleshes out her main character.

Overall, half the stories were great reads while the other half were competent. I wished there were more of the former but that doesn't make Gratia Placenti bad. In fact, I'm impressed by the selections of the editors and recommend any horror fan to grab a copy of the anthology. It's just that the first few stories set the bar so high for me that I was prepared to be floored by thirteen excellent stories. Still, no complaints with the other half other than I was expecting one thing and got something else.
Posted by Charles at 4:56 AM