Book/Magazine Review: Fantasy: The Best of the Year 2008 Edition edited by Rich Horton 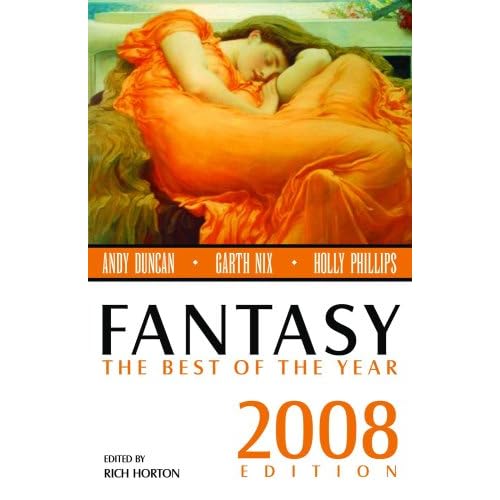 This is one of those rare times when I feel I won the lottery twice with one book. First are the stories themselves. Most of the stories were powerful without being too heavy, compelling and can be appreciated on many levels. As a reader, I feel that Horton is in synch with my tastes go as nearly every story left me satisfied. As for the stories that did not earn my unabashed admiration, they're still great stories, although they only work on one level. I found Garth Nix's "Sir Hereward and Mister Fitz Go to War Again" to be an enjoyable adventure story grounded on character for example but it's just that, an adventure narrative that doesn't quite fit other frameworks or multiple re-readings.

The second bonus is that the story selection is vastly different compared to, say, The Year's Best Fantasy and Horror. Yes, there are some overlapping stories such as Daniel Abraham's "The Cambist and Lord Iron" but they're few. Throw in Best American Fantasy 2008 and all three anthologies complement each other with their superior selection of stories that avoids treading on each other's toes. And where else would you see an anthology reprinting a story like "The Teashop" by Zoran Zivkovic, a story which was originally distributed in the UK?

This is one of the tougher anthologies to pick my top three stories as there's a lot of strong contenders. "Light" by Kelly Link stands out as it's as complex piece yet charming when it comes to the language. What I particularly liked about "Light" is that Link doesn't condescend to readers, avoiding the need to explain every detail or nuance but rather letting readers realize it for themselves. The narrative starts out as one thing and ends up something entirely different but it all feels natural and rewarding.

"The Teashop" by Zoran Zivkovic involves amazing legerdemain on the part of the author yet he utilizes simple language and brevity to accomplish his trick. He takes on the "story within a story" motif to new heights and features an ensemble cast of characters that isn't overwhelming yet remains fleshed out.

"The Master Miller's Tale" by Ian R. MacLeod is quite long but remains a compelling narrative. MacLeod's piece depends on characterization and he manages to give his two protagonists a sturdy backbone that feels genuine. I also appreciated the parallelisms it has with the real world and this is one of those stories that works on many levels.

Readers might also want to check out the Introduction as Horton gives a brief overview of the short fiction market and some stories that didn't make it into the book.

Overall Fantasy: The Best of the Year 2008 is one of the best anthologies for the year and easily a must-have, even for fans who've scoured the short fiction market.
Posted by Charles at 5:01 AM