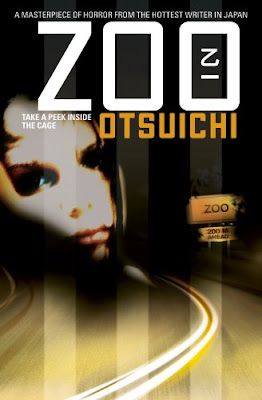 Otsuichi's ZOO is refreshing and original, I'll give you that. I was a skeptic initially for two reasons. First, the titular story, "ZOO", isn't particularly remarkable, although in retrospect it's an appropriate title for this book as it represents the menagerie that is Otsuichi. Each piece in this collection is very different from one another and the author writes in various styles and genres; the only recurring theme is that they are definitely one of the most bizarre stories you'll read, easily a modern Borges in the sense of surprising and stumping readers. My second doubt appeared when the tropes that Otsuichi uses seem familiar: the narrator who is in fact the murderer, a preposterous debate, a closed room mystery, etc. Yet within those frameworks, the author manages to carve out new territory that eventually endears you.

Holding the book, it's probably a good thing that ZOO's genre is a bit ambiguous. Is it horror? Is it fantasy? Is it science fiction? It's not just that Otsuichi manages to write in all those genres, but the lack of knowing strengthens the stories. For example, one of the most powerful pieces in the book, is "SO-far" and it's partially successful because the reader thinks it belongs to a particularly genre when Otsuichi subverts that impression at the end. But genre-bending aside, one of the strengths of "SO-far" is how it manages to distill the dichotomy the protagonist experiences, exaggerated through metaphor and the speculative element. Another credit to the book is the translation as the language is accessible and upbeat. Despite the varied techniques Otsuichi experiments with, the reader won't feel lost. The best example of this is "Wardrobe" where the revelation at the end is actually rewarding and the clues are presented through a subtle manner. Otsuichi might be using the O. Henry technique in terms of concluding his stories, but they don't feel like cheap tricks. And perhaps that's what makes this book feel distinctly Japanese, the way Ringu and the line of J-horror flicks seem inconceivable in a Western country, and how they're idea-centric stories where much of the emotional impact lies at the end.

ZOO is a must-read, if only for the unique paradigm it features. Otsuichi's technique might not be as elaborate and tricky as, say, Kij Johnson, but he achieves the same effect if Johnson was writing horror.
Posted by Charles at 7:46 AM