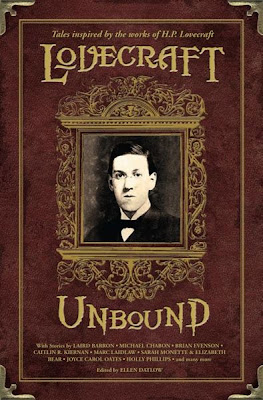 H.P. Lovecraft's fiction easily falls under the category that Lourd de Veyra labels as "Books That’s Everybody’s Read So It’s As If You Had Read Them, Too" to the point that when I got to actually read his writings, it was a disappointment from all the hype (if more than half a century's word-of-mouth could be called hype). It's not that Lovecraft isn't praise-worthy, but to the modern reader, there are gaping flaws in his fiction, from the monotonous tone to the misogyny. And then there are all the tributes that followed and while there is some innovation in that particular sub-genre (in the same way that Tolkienesque fiction has become a sub-genre of fantasy), the signal to noise ratio is high.

Enter Lovecraft Unbound. Now what's remarkable with Ellen Datlow's two tribute anthologies this year--the other being Poe--is the editorial mandate not to be simply pastiches of the author. It's not about omitting references to the Mythos or Mi-Go's, but about venturing into new territories, while still being faithful to the themes of Lovecraft. In that vein, I think the anthology is a success, especially to readers like me who is either unfamiliar with Lovecraft or jaded with his clones.

Not that all of these stories are devoid of Lovecraft references. One of the stronger pieces in the anthology, "Leng" by Marc Laidlaw, does make a reference from the title alone. However, Laidlaw infuses his narrative with original yet familiar elements--instead of an isolated town in rural America, we have one set in China; cultists and fish-men are placed with monks and mushroom spores. And just when you think the story is predictable, the author creates a scene which utterly disarms you because it debunks the stereotype, such as the protagonist actually meeting one of the missing people he's searching for instead of finding a raving lunatic.

Another example is "Mongoose" by Sarah Monette and Elizabeth Bear, a story set in their famous "Boojum" cosmology. At first, the story seems out of place (despite the Lovecraft references at the beginning), as it feels more at home in a space opera anthology. However, by the time you reach the last scene, Monette and Bear succeed in convincing the reader that this piece fits in the book. The pair riff on Lewis Caroll and throws in some science fiction elements as well, making this not only a unique Lovcraftian tale, but is in many ways tighter and more enjoyable than "Boojum".

As for the general direction of the anthology, there's a lot of enjoyable stories here, good enough to leave an impression on the reader by the time you've putting down the book. "The Crevasse" by Dan Bailey and Nathan Ballingrud, "Sight Unseen" by Joel Lane, "Come Lurk with Me and Be My Love" by William Browning Spencer, and "Catch Hell" by Laird Barron are examples of these.

There's a few stories which are just decent and nothing spectacular. "The Tenderness of Jackals" by Amanda Downum for example was ample and there's some surprising twists, but I wouldn't call it a powerful piece. "Vernon, Driving" by Simon Kurt Unsworth, on the other hand, is what I feel is the weakest story in the book. While I can appreciate the emotional drama, the horrific element seems too abrupt, and honestly could have been further expanded.

Having said that, Lovecraft Unbound has a few favorites. "Sincerely, Petrified" by Anna Tambour feels like a horror story clothed in mundane science fiction. The build-up is obvious, but the way Tambour tackles it feels fresh with the discourse on the psychology of horror. Combine it with detailed and holistic characters, and you have a well-written story that feels Lovecraftian without making any references.

Two out of the four reprints particularly stand out to me. I can easily imagine "In the Black Mill" by Michael Chabon serving as inspiration for the concept of the anthology--a story that's Lovecraftian without being a pastiche, a pattern that Laidlaw and various contributors follow. Chabon hits all the right beats, whether it's characterization, atmosphere, a sense of dread, and the eventual revelation. Formulaic on a certain level, but it's well-written formula.

And then there's "Commencement" by Joyce Carol Oates which is the complete opposite of Chabon. Whereas Lovecraft's influence is evident in Chabon's story, everything goes completely south when you read Oates. There's no trace of Lovecraft here as the author charts his own unique and unexpected path. But at the end of the day, you end up saying that this is a powerful, chilling piece, and that is perhaps Lovecraft's legacy--to deliver a genuinely horrific tale.

At the end of each story is an afterword by the author. Thankfully, for the most part, it doesn't sound like an argument for the inclusion of their story in this book, but more of what part of Lovecraft's fiction appeals to them. It's short and succinct and apt.

Overall, Lovecraft Unbound is an entertaining anthology, and doesn't succumb to the fate of some Lovecraft tributes.
Posted by Charles at 6:14 AM

Thanks for the excellent review. Having read the book, I enjoyed your thoughts on these stories.

One of the repeated complaints about this book is that the stories "aren't Lovecraftian." But what makes this anthology so powerful and original and GOOD is that these are all very original tales inspired in some way by Lovecraft's works. The complaint that the tales "aren't Lovecraftian" seems to me one way of saying, "These works are too original for Lovecraft fanboys" -- which may indeed be so, but that is their loss.