Book/Magazine Review: The Opposite of Life by Narrelle M. Harris 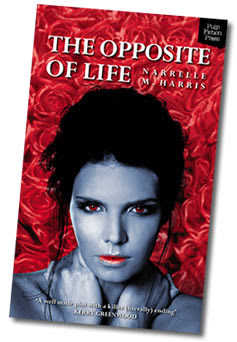 At first glance, the protagonist of The Opposite of Life seems indulgent. She is a bibliophile and a geek, most likely someone readers of these books can relate with as she is a reflection of themselves--at least this was the case with myself. I couldn't help but wonder whether the author was projecting herself as her main character is front-loaded with telling details. Not that this is a bad thing, mind you. For once, it's a nice change of pace to have a main character in a paranormal romance who's the opposite of the Anita Blake fare: they're not pretty nor are they kick-ass, but rather common people who are utterly defenseless against the supernatural. But continuing through the book, I began to realize that my generalizations aren't accurate.

Remember how I mentioned this is a paranormal romance? Well, despite the packaging, it's not. A more accurate term would be urban fantasy (yes, I know how confusing the paranormal romance vs. urban fantasy argument can be but suffice to say, there is no romance in the book to be found). Or, as I prefer to interpret it, this is an anti-paranormal romance novel. Narrelle M. Harris follows all the tropes of the genre, everything from a possible love interest, the involvement of the sensual supernatural, and a mystery to be solved. But the author subverts all these expectations. The heroine's partner in the book for example is Gary and he is anything but sexy; socially awkward, unfashionable and more on the over-weight side. And that's just the tip of the iceberg in which the book strips away many of the romantic aspects of vampires.

While it's possible for a book to simply exist on the metafictional level, that isn't the case here as there is a solid story supporting this subversion. Harris provides motivation and direction for the protagonist to be deeply involved in this adventure. One of the author's strengths is her gift of digging deep into a character's history, such as how they developed this and that nickname, which fleshes them out. And while the pace isn't fast, it's not dragging either and moves at a steady pace--fitting considering this isn't aiming to be an adrenaline-pumping read. This is more of a Ms. Marple in the modern world solving an extraordinary case, with pop culture references thrown in for good measure.

Harris however is not without flaws. The setting is set in Melbourne but unfortunately, it fails to be anything but a generic city. The character is also prone to lots of introspective moments and at times, it crosses the line of feeding the reader too much information instead of allowing them to draw their own conclusions. In fact, this is my problem with the ending as Harris flatly restates the recurring theme of the book, as if the title (or the rest of the book) wasn't a giveaway.

Still, while not being the tightest novel, it works for its purpose. Harris delivers unexpected surprises for readers and the characters feel genuinely vulnerable. There's also the entire metaphor The Opposite of Life represents while still working within the constraints of the genre.
Posted by Charles at 6:16 AM