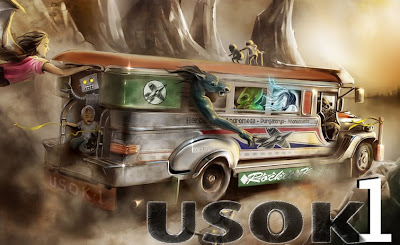 Paolo Chikiamco told me months before that he would be launching a speculative fiction web magazine featuring Filipino authors. In many ways, Chikiamco is trying to replicate the efforts of indie publishers such as Jason Sizemore of the Apex Book Company in being a one-man outfit. Honestly, a big part of me is skeptical of his efforts but hey, he has several opportunities to prove me wrong. His first issue, Usok #1, however, doesn't really dissuade my doubts. Just looking at the layout, there are minor complaints: there's no direct "table of contents" link, save for clicking on the banner; "Past Issues" should really be labeled as "Links" since that's what it basically provides; it's unclear as to the frequency of the magazine, although in the "Submit" page you find out that the next issue will be released in February 2010. While the illustration for the cover itself is fine, the way it's laid out, such as the typography and the information presented, leaves much to be desired.

But let's get to the meat of the magazine, namely the fiction. There are five stories in this issue, two of which are reprints.

The opening piece is "The Startbox" by Crystal Koo. It starts out as a nostalgic childhood story that later employs fantastical elements to enhance the mood. The narrative technique isn't revolutionary, but execution is what matters and the story could have really stood out. This is actually written competently and Koo hits the right beats when it comes to characterization and development. This is also a period piece and the author didn't need to mention a specific date because the clues are all in the story. What needs improvement--and could have elevated this story to greatness--are the telling details. There are enough descriptions as it is but it could have gone to the next level had it included specifics in various scenes. Again, this could have been tighter, and while the potential is there, as it is, it barely straddles the line between mediocrity and good enough.

I've read "The Saint of Elsewhere: A Mystery" by Chiles Samaniego a few years back when it was first published and was unimpressed back then. Unfortunately, that's still the case now. Samaniego succeeds in developing a particular atmosphere for his story. Unfortunately, this is also achieved by his style, which deals in in the abstract (no characters are named for example) and largely focused on dictation (the showing vs. telling argument), which isn't to my taste. There are authors who do get away with telling instead of showing but Samaniego isn't one of them. The reading experience was decent initially, and there is a different beat to the first half of the story as opposed to the second, but when we get to the trite explanation at the end, it feels condescending in the same way the narrator indulges the old man. There's a solid, central idea here but not much else to tether the reader. The author's style can be polarizing and I tend to lean more on the dislike side.

"Mouths to Speak, Voices to Sing" by Kenneth Yu is upbeat and includes the right amount of details and characterization needed to make this story effective. It's not a heavy piece, although one wouldn't label it as light either. Instead, it's an easy-to-read narrative sprinkled with cultural references and hooks readers with the initial premise that's originally bizarre. A point of complaint might be the ending, and whether all this buildup is worth it, but for me, it works and is foreshadowed. It's not a story with gravity, but it wasn't aiming to be one either.

My reaction to "The Coming of the Anak-Araw" by Celestine Trinidad is complex. For the first three quarters of the story, it's effective save for some minor complaints. When it comes to the praises, Trinidad writes an accessible story filled with local color and mythology. As for the minor complaints, there is the issue of using italicized words (not the words in Filipino) as a crutch, and while the presentation of a Filipino glossary is beautiful, one must question its necessity (shouldn't the meaning of the words be conveyed in the writing and in context clues?). My complaint however stems from the ending: the revelation is abrupt and not elegantly seeded. Sure, there are clues here and there, but it's as subtle as a Scooby Doo episode that the reader feels cheated. The crimes of the foreign interloper for example isn't foreshadowed, nor does the author play up the scene where the protagonist discovers the ruse. To Trinidad's credit, Filipino readers do get an inkling of the situation because of the stereotypical anti-colonial slant of the story which I find too orthodox. All it takes to make this story flow more smoothly would have been to add one more scene before the finale, tying up the loose ends and making the climax seem more organic. Sadly, it's absent and ruined what would otherwise have been one of the strongest original pieces in the magazine.

The second reprint in the magazine is "The Child Abandoned" by Yvette Tan. It's a solid choice, especially from veteran writer Tan. The author excels in developing her narrative through plot, description, and character. Her setting comes alive, the people in the story feel genuine, and there is something both horrific and fantastical that occurs. My problem with Tan's fiction is that it tends to start slow although patient readers are eventually rewarded.

Overall, while it's nice to have another venue for Filipino writers, Usok is quite rough. The talent's there but definitely needs refining, especially when it comes to the original fiction.
Posted by Charles at 6:37 AM