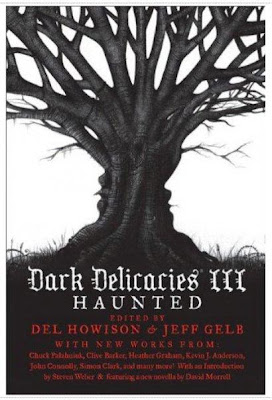 Dark Delicacies III: Haunted is in a strange position. On one hand, you have a lot of decent stories: nothing outright horrible, and definitely an entertaining read, but they're not particularly striking. There are exemptions, of course, but for the most part, the shape of this anthology is that it barely hovers above mediocrity. Take for example "Resurrection Man" by Axelle Carolyn: It starts out with a compelling style and while predictability isn't exactly something that does discredit to the story (it's foreshadowed after all), it lacks a particular ooomph that sets it apart from other morality tales. The same might be said for "A Nasty Way to Go" by Ardath Mayhar which has a faithful and unique tone and an otherwise decent narrative but nothing else that makes it memorable. And the problem is a good chunk of the stories here fall under this category.

Not that the book is devoid of other criticisms or praises. When it comes to the former, "In the Mix" by Eric Red feels like it uses too many stereotypes and delivers nothing but gore. "Food of the Gods" by Simon R. Green comes across as too flat and readers can surmise what's coming way too early.

Having said that, there are some brilliant pieces here that unfortunately fall short. "Mist on the Bayou" by Heather Graham has atmosphere and character and while that will probably lump it in the competent category, what caught my attention was the twist she includes in the story which makes this an unconventional haunting story. It's not what I'd necessarily call terrific, but it jumps out from what is an otherwise unremarkable anthology.

"Tyler's Third Act" by Mick Garris really comes close to greatness. For three fourths of the story, it hits all the right beats: a unique voice, engaging conflict, visceral descriptions, a sympathetic character, etc. It even doubles as a commentary for today's media. Unfortunately, while Garris sets up big expectations for the reader, he simply fumbles it when it comes to the ending. Not that it whimpers, but it fails to live up to expectations and quite frankly feels abrupt. This isn't a bad story and far from it in fact, but I can imagine that this could have been one of the best stories for the year had it gone that extra mile.

With no reservations, a sophisticated piece is "The Architecture of Snow" by David Morrell. It doesn't immediately jump out as "Tyler's Third Act" but the author takes his time to build up the narrative. I could jibe at how this is a horror story for those working in the publishing industry, and to a certain extent, the ending is a bit indulgent when it comes to that particular facet, but Morrell works this piece by using good old fashioned characterization. At the end of the day, it leaves readers with an emotional resonance that's both heartwarming and heartbreaking.

There are definitely less enjoyable anthologies out in the market but if you have modest tastes, Dark Delicacies III: Haunted is a good distraction.
Posted by Charles at 5:25 AM